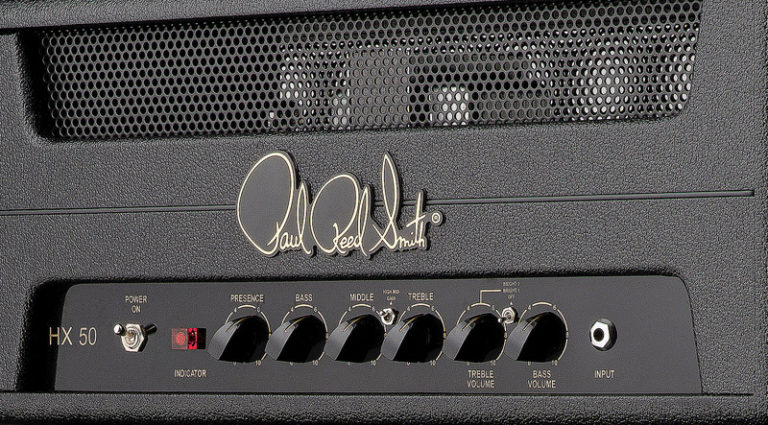 Paul Reed Smith has earned a reputation building guitars of the highest quality. It wasn’t until just over a decade ago he tried his hand at building amps, pairing with Texas amp guru Doug Sewell.

Smith and Sewell more recently traveled to Seattle to blueprint one of Jimi Hendrix’s Marshall 100-watt heads, purportedly an amp used at Woodstock. Following the analysis, they designed two models – the HX 100 and the 50-watt HX 50, which retained many of the tonal attributes of the Hendrix amp while using modern components.

The head’s internally bridged channels with individual Volume controls allow players to dial in their preferred distortion level and tone by blending Lead Volume and Bass Volume. To retain the vintage vibe, PRS skipped a Master Volume control (so consider grabbing an attenuator on your way to the jam or club gig). In some ways, the HX 50’s headroom and tonal range makes it respond more like a 100-watt amp

To test the HX 50 and its matching closed-back cabinet (with a pair of Celestion G12H-75 Creambacks), we plugged in three guitars – a ’63 Strat, a Les Paul with P-90s, and a ’59 reissue Les Paul with humbuckers.

The Strat produced the widest variety of tones, from sparkly clean but not harsh (think “Castles Made Of Sand”) to grimy and bluesy (think “Machine Gun”), all through the adjustment of the amp’s Volume and EQ controls and switches. Our favorite sound came with all controls set at 2 o’clock, with the guitar’s Volume knob rolled back to about 7. Dialing up the amp’s Bass Volume blended in more low-end dirt, giving the Strat more oomph.

The HX 50 responded in a similar fashion to the P-90s, though they produced slightly more distortion, which should accommodate all but the heaviest of rock soloing. Most notable with both single-coil guitars was the absence of background noise and 60-cycle hum.

The rig took to the Les Paul beautifully, with the amp’s controls interacting to generate tones from glassy clean to smooth and sweet, perfect for soloing, pinch harmonics, and long, sustained notes. And though the amp proved very responsive to pedals – we ran all three through a vintage overdrive – the most dynamic tones happened with no effects.