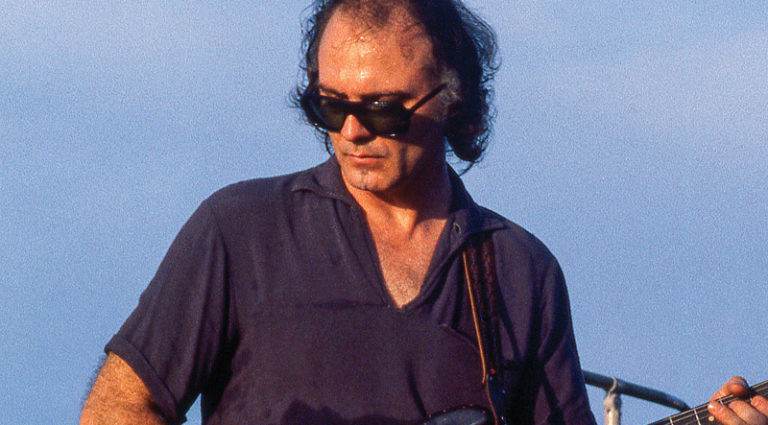 As music-conscious as Austin is, not every musician who dies elicits the outpouring given to Denny Freeman. The Paramount Theater quickly changed its marquee to read, “Farewell Denny Freeman: Elegant Wildman and Founder of the Twang Bang Sound.”

Twang Bang was the title of Freeman’s 2006 solo album; the rest is a reference to a quote from a 1986 interview I did with Jimmie Vaughan, who called his sometime bandmate “an elegant wildman stylist.”

Freeman died April 25 at the age of 76, after a mercifully short battle with cancer. It’s safe to say the footprint he left on Austin, blues music, and the guitar is deep and will not be dusted over anytime soon.

“He sounded like nobody else,” Vaughan recently told me. “His playing was very emotional. Denny could play any style – blues, jazz, R&B, soul – but he had a totally original sound.”

I first interviewed Freeman in ’86, for Guitar Player. “When I was a youngblood, Dallas radio was real cool,” he said. “I’d go to sleep at night listening to ‘Kat’s Karavan’ on WRR – Lightnin’ Hopkins, Lonnie Johnson, and the Excello, Chess, and VeeJay records. In Dallas in the mid ’60s, even the squares and the straights had Two Steps From The Blues by Bobby ‘Blue’ Bland and stuff by Jimmy Reed and B.B. King. In all the high school and college bands I was in, we would never think of it as a ‘blues band.’ That was just the material; it was all rock-and-roll to us. We did about five songs off The Best Of Little Walter, some Muddy Waters, Buddy Holly, Fats Domino, Little Walter, Jimmy Reed.”

He listed his formative influences as King, Chuck Berry, Scotty Moore, Bo Diddley, and Hubert Sumlin “before I knew his name” from Howlin’ Wolf albums. “The Jimmy Smith/Kenny Burrell combination Organ Grinder Swing is one of my favorites,” he added. “I think if I had to pick a favorite guitarist, it might be Wes Montgomery.”

In ’68, Freeman and Vaughan moved from Dallas, where there were only cover-band gigs, to Austin, where he formed Storm with drummer Doyle Bramhall, bassist Paul Ray, and (later) harpist Lewis Cowdrey.

“Storm was the most-solid blues band I ever played in,” he told me. “It was great for me because I was thinking, ‘Well, I dig it, myself; I just can’t believe that somebody really wants to do this’ – especially this 18-year-old kid. Jimmie was real serious about it being a blues band.”

By the time I moved to Austin, he’d already had stints with Southern Feeling, featuring W.C. Clark and Angela Strehli, and the Cobras, sharing guitar chores with Stevie Ray Vaughan, and appeared on Big Guitars From Texas’ instrumental Trash, Twang and Thunder, which earned a Grammy nomination. But I saw Denny backing a who’s who of blues legends that visited Antone’s Home of the Blues; pulling double duty on guitar and organ when Jimmie Vaughan went solo; ripping through rockers like the Stones’ “Bitch” with Bevis Griffin’s Chill Factor; and playing country on lap-steel, which he took up at 70.

I admired Freeman for venturing outside Austin’s comfort zone, moving to L.A. (where he played lead in Taj Mahal’s Phantom Blues Band), showing his versatility during his stint with Bob Dylan, shining on Modern Times, and for releasing a half-dozen great instrumental albums.

Kathy Valentine of the Go-Go’s wrote an especially eloquent tribute to Freeman; on Facebook, she called him “DenDen.”

“You don’t need to know a lot to play really cool stuff,” it read in part. “Hell, you can even play just one note, and if you do it with authority, that’s all you need. One day he sat down and said, ‘Accompany me’ – and I did. He soloed for about five minutes, then stopped and said, ‘That was all three notes.’ Three notes arranged, phrased, put together in a multitude of ways. It was a lesson I’ve never forgotten.”

Just prior to Denny’s passing, the Cobras’ 1981 album, Captured Live At The Continental Club, was reissued, giving credence to the wildman tag – as vicious and dead-on as blues guitar gets.

My favorite quote from Denny came during a casual conversation in the ’90s. He was talking about a Muddy Waters show at Mother Blues in Dallas in the late ’60s, when Muddy still had a killer band. Denny regretted that he missed the gig, explaining that he had to study for a Latin final. It struck me because, in the context of the blues-nazi ilk of white players affecting a “black” stance, how many of them would be studying Latin, let alone admit it?

But Denny didn’t need to adopt some image of being a blues musician; a few notes proved he was one.

Jim Colegrove & the New Rough Riders of the Dirty Age