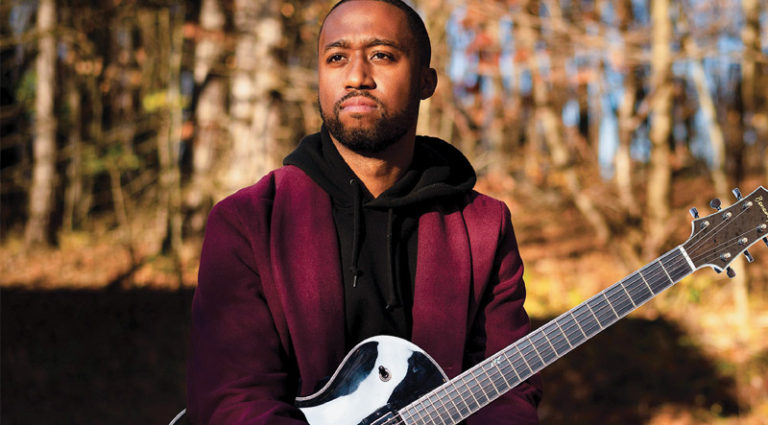 A riveting soloist, Dan Wilson honed his chops as a sideman to jazz greats like organist Joey DeFrancesco and bassist Christian McBride. If his latest, Vessels of Wood and Earth, occasionally sounds reminiscent of a young George Benson, that’s no accident, as the ’60s soul-jazz wave was a key influence. Throughout the hard-swinging album, Wilson improvises at a world-class level, walking in the footsteps of guitar masters.

Your improv comes straight out of that school of Benson, Wes Montgomery, Pat Martino, Grant Green, and Kenny Burrell.
Actually, I come from a long line of guitar players in the church where I grew up – those names are the guitarists they listened to before I did. The fact that this jazz vocabulary fit into the church music I played growing up is where the appeal comes from. Interestingly, I got in a lot of trouble when I’d play bop stuff during services.

Did you take lessons or learn off records?
My vocabulary came right off the records. I also remember being in the car with my cousin on the way to a church convocation, and we would be singing Wes’ solo on “Down By The Riverside,” note for note.

As a student of jazz, how did you learn to play over chord changes?
The concept of soloing over changes dawned on me as I watched Mark Green, a guitarist in my church. He was incredible, and during one of the Monday afternoon jam sessions, I saw him with another guitar player. Every chord the other guy would play, Mark would have a line that would make the chord stand out – it looked like telepathy. From then on, every time I sat down with the guitar, I took each chord apart carefully to see what I could play over it.

Your single-note phrases have that staccato we sometimes hear in the playing of Benson and Martino – almost a “puff of air” between each note.
I was a drummer before I was a guitar player, so rhythm has always been a priority for me. I love the snap, crackle, and pop you get from bop drummers like Philly Joe Jones and Art Taylor. I heard that same vocabulary in Martino, and especially Benson.

The blues/R&B vibe on “The Reconstruction Beat” is also reminiscent of hard-bop drummer Art Blakey.
Blues is my culture, and I love anything with a groove; Art Blakey is also a major influence. The vamp on “The Reconstruction” beat is coming right out the book of James Brown. “Who Shot John” is coming out of the [bassist] Dave Holland influence; there are not enough words in the English language to describe how big a mark Holland’s music left on me.

You have a picking technique that resembles Benson’s, in that your wrist is positioned under the strings and bent upward.
I’ve found that most guitarists playing traditional gospel employ that technique – all the guys I came up hearing in church picked like that. Only after playing jazz for some years did I find out that George had been using it all along. I liken it to the pivot foot in basketball; if you want to stay balanced while you maneuver around your opponent, keep one foot planted.

Have you ever met Benson or Martino?
I’m thankful to have gotten to know both, and they’ve been really nice to me. I try to call George every couple of months to check on him. The first time I played in front of him was at the Nash Jazz Club, in Phoenix. Joey DeFrancesco, who is a huge ballbuster, didn’t tell me George was coming to the gig until we got off the plane. I see Joey on the phone, and he looks at me and says, “Okay, George, see you in the club tonight!” My heart sank to my shoes; I was pacing around the dressing room with my stomach in knots. Then George comes into the room, shakes my hand, and treats me like he’s known me for 20 years. That cooled me out quite a bit, but I still had a tough time looking into the audience and seeing him.

Which guitars and amps did you use on the album?
I used the semi-hollow GA-35 by Benedetto with D’Addario Chrome flatwound strings, all going through a Fender Twin. Honestly, I just plug the thing in and hope for the best.

You’ve worked as a sideman and leader. How do you compare the roles?
In my opinion, sideman experience is completely necessary to be an effective bandleader. As a sideman, I’ve witnessed the importance of having a steady-working band comprised of individuals that take the music seriously, and most importantly are easy to hang with. As a leader, I’ve learned the importance of communicating clear expectations to band members, and respecting them as human beings.