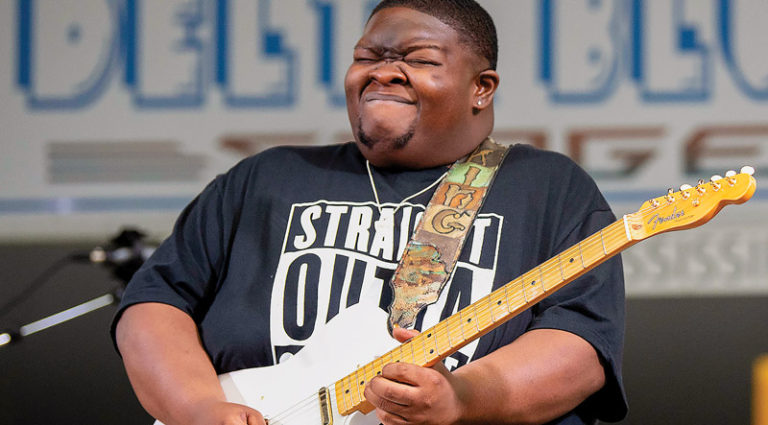 Double-dipped in his regional blues style, Kingfish displays not only the influence of the three guitar Kings, but a passion for real-world blues. He’s the ringleader of the new wave of blues-rock gunslingers.

Great job on the new record!
I’m so glad to get this music out. We did it around September of last year. Covid wiped us out, so I wanted to utilize the time. I got with producer Tom Hambridge and another friend Richard Fleming, and we did Zoom meetings and wrote songs. I was ready to play. I wanted to show the growth of my music over the last two years.

662 sounds like a diary of your life.
Most definitely, especially because of all the things going on in the world. A lot of folks don’t know what it’s like being young and African-American. People don’t want to realize it, so it’s imperative that I write about it.

The bonus track “Rock & Roll” is simply killin’.
We did that shortly after my mom passed. I was at a show in Nashville, and the writers Sean McConnell and Ashley Ray came to me with that song. We changed a few words around to give it a different meaning, and it came out beautiful. It was one of the singles that really impressed me.

What was your setup for that track?
I used a Strat on that in the bridge position with a Tube Screamer with the gain all the way up, going into a Fender Champ. I only used that setup for that song. On the road, I use a Fender Twin, a Peavey Delta Blues, or a Peavey Classic. I used wah on some tracks too. On my pedalboard, I have an MXR Sugar Drive and a Dunlop Mini Wah. I had no wah at all on my first record, so I wanted to put some wah on this one. I like to use my wah like a treble booster – like a cocked-wah thing. I keep it on with the overdrive, and it gives me a treble boost. I also have a Way Huge Conspiracy Theory, but on the record I used the Sugar Drive. Live, I like to alternate between the two.

Are you looking to collaborate, or focus on your writing?
Both. One of the things I want to do is work with a rapper in the future. I know it’s been done, but I want to see if I can put blues and hip-hop together. Hip-hop is nothing but the grandchild of the blues anyway. I would love to see what I could do with that.

What’s your favorite guitar?
The Strat I’m using, a Fender Custom Shop. It’s my favorite because it’s purple, my favorite color. I also have a Chertoff Custom. It’s not necessarily my signature sound, but it’s the sound most people associate with me because of the humbuckers and high-gain tone. I’m mostly a humbucker guy, like Otis Rush, Albert, Freddie, and B.B. When I got into rock, I started listening to Gary Moore. That was the sound I was drawn to. Then again, you got the single-coil players like Prince, Hendrix, and Stevie Ray. Even Eddie Hazel was alternating between single-coils and the humbucker sound. I’m into a variety of things.

How has your life changed since your first album?
It changed drastically. The first album got nominated for a Grammy. That came out of nowhere. Right after I left high school, I played places, but I’d never done a full tour. I was just doin’ spot dates. When the first album came out, I had 50 dates in a row going city to city. My playing has evolved a little bit. I’ve had tours, exposure to the road, and ups and downs. I also lost my mom. It’s been a lot of growing in many ways, personally and musically. The hardest thing was the pandemic. I didn’t suffer too bad, but not being on stage and not being around my fellowship was hard for me.

What’s your relationship with Eric Gales?
Besides Prince and Hendrix, Eric is the only guy I heard playing blues with a rock style. I first heard about him when I was 13. He’s a Southern guy and was a big revelation. He was one of the first guys that made me wanna spice up my blues playing. I got a chance to play on one of his records a while back, and he lets me jump onstage with him. He’s one of the guys I consider to be a big brother.

Doug MacDonald and the Three T’s