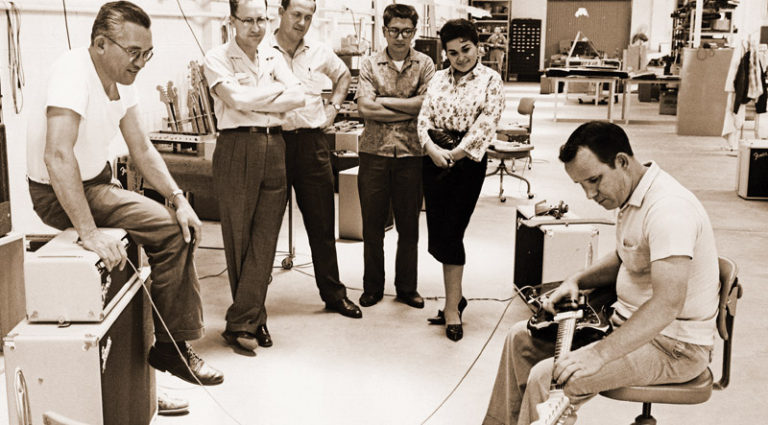 Through its 75 years, Fender has been responsible for myriad leaps forward in the history of guitar-amplifier design and manufacture. Arguably the most dramatic was the transition in 1959-’60 from the tweed lineup to Tolex-covered amps that helped set the standard for decades to come.

The Fender Electric Instrument Company earned a sterling reputation in the guitar-amp market shortly after its founding in 1946, and by the end of the decade was a serious competitor with the biggest names in the field – at least in regard to design, build quality, and professional reputation. By this time, countless players were plugging their Gibson, Epiphone, Gretsch, and other big-bodied archtop electrics into amps Fender manufactured to partner with lap-steels before it even had an electric-Spanish guitar of its own.

Leo and the team displayed their pro-grade chops early, with the groundbreaking Dual Professional in 1946 (soon known as the Super Amp), the first production guitar amp to carry two speakers. Rolling into the ’50s, Fender set other standards of the tweed era with the Twin Amp (first the “low-powered” 40-watter, then a roaring “high-powered” 80-watter), and later in the decade, the legendary 4×10″ Bassman combo, with one of history’s most copied circuit designs. But the most-revered iteration of this narrow-panel classic was barely two years on the market before Fender changed its cornerstone designs yet again – in an impactful and all-encompassing way.

Given the dramatic re-jig of the lineup, many fans of vintage Fender amps view 1959 through ’61 (with perhaps a nod to further revelations in ’63) as the most significant period of development in the company’s 75-year history, and from our perspective nearly 60 years later, the results of that tectonic shift appear a stunning bolt into the future of big-league backline. A closer look at two photographs from the period sheds light on the transition from tweed to Tolex, and provides a fascinating glimpse inside the Fender factory at one of the most-exciting times in the company’s history.

Fender was still cranking out its now-legendary tweed amplifiers in ’59 and even well into 1960, but before the decade’s end, Leo and the team debuted two new models that presented not only a new covering, but a groundbreaking design. While country superstar guitarist Luther Perkins was trying his new gold Jazzmaster in June of ’59, Leo plugged the guitar into a prototype of a dramatically different amp.

The combo positioned in front of Leo and Luther in a photo of the meeting is covered in a roughly textured tan material and has an unmarked forward-mounted control panel. Controls wear black plastic knobs of the type that would eventually be seen on the Jaguar and other 24″-scale guitars, and include Bass, Treble and Volume for each of two channels, along with two for vibrato Speed and Intensity, and finally one for Presence. The creation is widely believed to be a prototype of the Vibrasonic, one of Fender’s first two Tolex-covered amps (alongside the Concert) as well as the first with the new forward-mounted controls that would hit the brown-panel lineup of the early ’60s, distinguished by their chocolate-brown panels.

As displayed at that summer’s NAMM show and promoted in sales literature published in latter 1959, this was not only Fender’s first amplifier to incorporate the new covering and chassis/control-panel configuration, but represented a major leap forward in amplifier design in several other ways. As the sales sheet declared, “The Fender Vibrasonic Amplifier is one of the finest musical instrument amplifiers ever offered to the buying public. It offers the musician tremendous distortion-free power, plus one of the most advanced circuits in the amplifier field… The overall appearance of the Fender Vibrasonic Amp is sleek and modern in every respect and is enhanced by the rich textured vinyl fabric covering.”

Dramatic claims, perhaps, but together they signaled the way forward for modern guitar amplification.

At the time of its debut, the Vibrasonic was far and away Fender’s priciest amp, listing at $479. Consider that the high-powered tweed Twin of 1958-’60 was next at $399 (despite offering double the Vibrasonic’s output through two 12″ Jensen Alnico speakers) and that’s quite a leap. That said, the new Tolex combo had Fender’s lush new harmonic vibrato effect and sported an extremely expensive 15″ JBL D-130 speaker.

It’s unclear whether any Vibrasonic combos shipped before early January of 1960, by which time Fender was also promoting its second Tolex combo, the 4×10″ Concert, which was similarly equipped with the new vibrato and short-lived “center Volume” control layout, so called because it reversed the order of the Volume, Bass, and Treble controls. The earliest of these amps were covered in a rough pinkish-brown Tolex that would be changed in favor of a consistently light-brown/tan as the entire Fender range (other than the wee Champ) morphed to front-panel configurations.

While players and historians talk of the brown and blond amps as being “halfway between tweed and blackface,” they’d actually leapfrogged much closer to the latter. There were elements of the tweed architecture in the earliest examples, such as the Triad transformers many used (the early 4×10″ Concert shared a Triad output transformer with the last of the 4×10″ tweed Bassman combos, for example). But the preamp circuits that really shaped their voices were entirely different in the Tolex-covered amps when compared to their tweed predecessors.

As it happens, the early center-Volume examples hinted at the more-impactful change behind their panels; rather than the cathode-follower tone stack of the larger tweed amps, which placed the tone network after a driver stage and cathode comprising one full preamp tube, the brown- and black-panel amps sandwiched their tone controls between two gain stages and reversed the order in which it all happened. In even the earliest of these amps, the signal hit the tone controls before Volume (which was placed after it) and many capacitor values were different, too. All of this adds up to very different-sounding amps and ushers in that tight, glassy, slightly mid-scooped voice for which Fenders would be known by the middle of the decade. Just a few months into 1960, however, Fender would revert to the more-conventional Volume/Treble/Bass layout on its panels, perhaps urged by players who found themselves too often reaching for the wrong knobs (the circuit layout remained the same inside).

Another photo gives other clues to how Fender was operating during this transitional period. In this one, guitarist Thumbs Carllile – famed for his dexterous tap technique on a guitar placed horizontally across his lap – is testing the relatively new Jazzmaster with Freddie Tavares sitting on a blond piggyback amp in front of him. Forrest White and three other employees also watch. Aside from being a fascinating historical document for the personnel, a closer look reveals several tweed combos in the background, at least one of which appears to be covered in a darker material. In addition, a forward-facing Tolex-era chassis propped on blocks behind White’s right hip has an extra control knob stuffed into one of the input-jack holes for the second channel, a common means of prototyping a circuit variation on an existing chassis.

As the ’50s rolled into the ’60s, Fender was moving at breakneck speed in the amp department, but the preceding decade’s creations wouldn’t be erased overnight. In many cases, they were making early iterations of amps of the future, and the lagging renditions of those of the past provide tremendous insight on how the company was thinking.

In addition to contributing VG’s monthly amplifier feature, self-proclaimed amp fanatic Dave Hunter discovered an array of fascinating aspects tracing the evolution of Fender’s amps while writing the authorized Fender 75 Years (Motorbooks), a new book that celebrates the history of the storied guitar/amp manufacturer. For the book, he also delved into some of the personnel who helped Leo Fender shape the lineup – and the future of guitar tone.

The Story of Silver Street Guitars