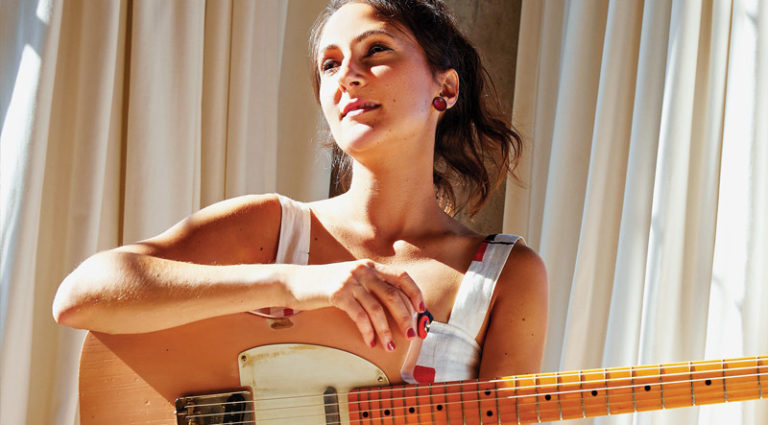 Molly Miller is on a quest to bring instrumental music back to storytelling. Her new album, St. George, fuses jazz, rock and roll, and echoes of tantalizing guitar film music of the 1960s.

Eloquent and passionate, Miller’s style blends moody chord voicings with cathartic single-note lines and reverb-drenched dynamics. She holds a Doctorate in Guitar Performance from USC, gigs relentlessly, performs with Jason Mraz, and chairs the guitar department at the Los Angeles College of Music.

Congratulations on the new record.
I was so excited to put this thing out. It’s me bringing the instrumental back. I think we’ve lost the mindfulness of instrumental music. Where there’s a song with a melody and an arrangement that’s telling a story, that was the focus – storytelling using compositions and arranging, so it’s not just, “Let’s hear me shred.” It’s a fully realized piece that tries to say something. There are themes within, but as a whole, we were very conscious about writing songs that told stories, clearly focusing on the arrangement. The improvisation was supporting all that.

Your arrangements make great use of space and dynamics.
I love the trio setting. There’s so much freedom, but each member has a lot of responsibility. We’re like little mini orchestras with each of our instruments. Jennifer Condos (bass) and Jay Bellerose (drums) are incredible craftsmen on their instruments. It’s really fun to work with them.

How did you begin working with Jason Mraz?
Jason found me through an afro-beat funk band called The Vibrometers. The band leader, Aaron Leibowitz, was Jason’s best friend. We did a couple of sessions with him and played with him at parties. I always wanted to play with him, but I had no expectations. When he asked me to play, I was flabbergasted. I love his music so much. It’s been such a fun thing to have in my life. I’m spoiled because I work with a lot of artists and musicians who are kind, thoughtful, and so intentional with what they do. They take their craft seriously, and I’ve learned so much from them.

My 335 is like my limb. There’s something to “growing” with an instrument. New instruments feel stiff to me. It’s rare for me to pick up an instrument and say, “Whoa, this feels great.” The wear on the instrument helps so much. I’ve had my 335 since I was 16. I feel like I grew with that instrument. My wear marks are on the neck and we know each other. It’s an intimate relationship. We understand each other on a deeper level than any of the other guitars.

What kind of Tele is it?
It’s a 2008 ’52 reissue. When I picked it up, I was like, “This is the one!” I love it so much. It’s fun, and now that it has a new neck, it makes it even more mine. I like hinting at country music and I think Teles are the most-versatile instrument. Most 335s can be kind of midrangey, but with Teles I can get such a warm, beautiful sound. I love the twang, and they’re the easiest to deal with.

What’s on your pedalboard?
Coming from my afro-beat funk background, I love wah; I have a Fulltone Clyde. I also have an A3 Stompbox Volume pedal, a Voodoo Lab Tremolo, a TC Electronic PolyTune, and a Keeley Oxblood Overdrive and Magnetic Echo. I also have an A3 Stompbox Awesome Drive. I’m a big fan of EarthQuaker Devices – I have their Dunes Overdrive, Dispatch Master – and a Chase Bliss Audio Dark World. I love my pedalboard, but I want to get another one that’s even weirder (laughs).

Which amps are you using?
My go-to is a Princeton Reverb. I had it modded, so it has a rounder sound. I’m just a Fender combo amp junkie. I also have a Hot Rod Deluxe and a Pro Junior that’s light and easy.

What’s next?
I have some dates with Jason, and I just recorded some new music with him, then I’m playing with my brothers. Those are my main musical worlds. I play with a lot of artists in town and do casual gigs. I’m always doing different things. My trio, Jason, and my brother’s band are the main musical focuses in my life. I used to be afraid of being an educator and performer, but they really inform each other. I’m a better musician because I teach, and I’m a better teacher because I play.