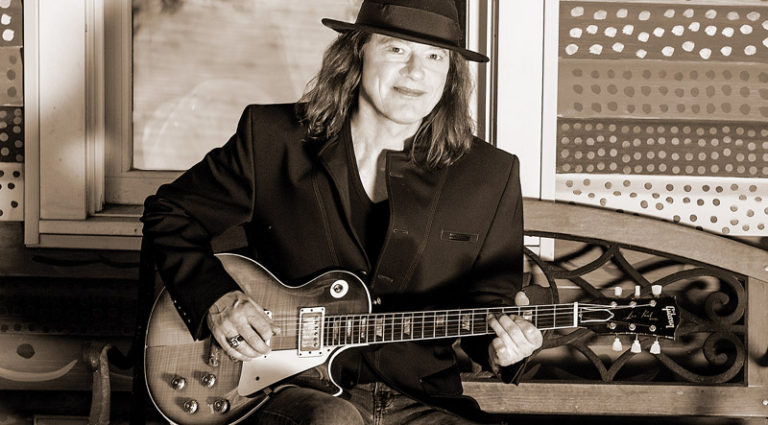 You recorded this album differently.
I wound up building this record from the ground up – along with my engineer/producer Casey Wasner. Having gotten together with other musicians and played a bit, I decided to take more control of how the music rolled out. You play with other people, and they put their thing on it, and they’re influencing the music with their attitude – their approach. I needed to have control of how this music manifests.

We would create a click, some bass, and guitar – maybe a keyboard for support. I basically played everything, then we brought in a bass player to replace my parts. That way, we have a live thing going. Drummer Toss Panos was in L.A. and Keith Carlock is here in Nashville. Shannon Forest put drums on one song. For me, it was like writing a symphony or something (laughs). So much of what I love about music is different sounds, different colors. I like to hear something new, and this was my way to do it. I had a canvas and an easel, and I painted it one step at a time.

There are live performances on the album. “Blues For Lonnie Johnson” was a live performance – at least for the rhythm section. I redid the guitar, but it’s a one-shot, straight-through performance, live on Instagram. Same with “White Rock Beer… 8 cents.” We did that the same day.

Pure is what Robben Ford’s brain sounds like.
It really is. The quote I use is, “The most complete expression of a musical life.” It’s a unique record in that way.

You created such atmosphere with reverb on “A Dragon’s Tail.”
Casey Wasner is a great engineer. He turned his house into The Purple House studio, and he’s got a lot of great gear. We would sit there, and I’d say, Man, it sounds too dark.” He’d say, “Okay, let’s try this.” Everything is multifaceted. There’s not just one reverb. There are room sounds and delays. It’s multilayered in that way, and we used technology, but the record doesn’t sound like technology. I’m really proud of what we did. It’s full of humanity. It was pretty much Casey and me going at it.

I couldn’t have done this record without Casey. He’s an informed facilitator. I can ask for something in an abstract sense, and he knows where to find it. He would bring in ideas, as well.

Which guitars did you use?
I played my 1960 Telecaster – the one on the album cover – for the solo to “Go.” I used my Epiphone Riviera on “Balafon,” and the intro melody to “Pure” was played on my ’64 SG. The improvisation later on the record was on a PRS that Paul (Smith) built for me. On “Blues For Lonnie Johnson,” that’s another PRS with split pickups and some sort of boost. I love the way it sounds on that song.

I also used a ’52 maple-neck Telecaster on “Milam Palmo” and a Gibson 355 from 1964, to play the melody on “Milam Palmo” and “Balafon.” I used a ’58 reissue Les Paul with real PAFs on “White Rock Beer… 8 Cents.” That’s kind of a British tradition, like playing a Freddie King song by Mick Taylor. John Mayall used to have Freddie King songs on his records. Clapton, Peter Green, Mick Taylor – it’s in that tradition.

The Robben Ford Guitar Dojo website is up. How has teaching informed your playing?
It gave me confidence. It’s feeling you have something to offer. I found that the best way for me to work is to take a subject and start talking about it. Rather than plan it out, I do my courses on the fly. There’s an idea there – something we want to capture. But I run with it. Ever since I did the jazz video on Truefire, I’ve been taking the bull by the horns. I have three more courses coming out. For me, it’s like, “How do I do that?” That’s what’s it’s like for me. I’m self-taught, so it made me feel confident about what I do in my musical life. It makes me feel good that people dig it.