There were innovative Stratocaster records before Ah Via Musicom, but Eric Johnson’s 1990 opus changed the rules of the game – this was not your father’s funky quack-toned Fender.
After the positive reception for 1986’s Tones, Johnson had gathered feedback and pondered his next move.

“One thing people told me is that they wanted to hear me play more guitar,” he said upon its release. “I felt a bit of pressure because I was responsible as the producer and artist, and also because I really wanted to push myself as a player. As far as comparing Ah Via Musicom to the last one, I would say there are things about the previous record that I enjoy musically, but feel this new work is more comprehensively me. I was able to express the whole spectrum of what I want to do, as far as sounds and styles.”

A slow seller at first, Musicom eventually took off thanks in large part to its hit single, “Cliffs of Dover,” which would go on to win Best Rock Instrumental Performance at the 1992 Grammy Awards. But, across its 40 total minutes of blistering guitar work, Johnson reinvented Leo’s axe, using massive, echo-laced solos that sounded more like violin or cello than electric solidbody. Chords popped out like orchestral bells. On FM rockers like “Cliffs of Dover” and “High Landrons,” listeners were exposed to six-string runs that were part fusion, part psychedelia, part jazz and country – and all E.J.

“We only had three months to do Tones, but for this one I spent a year and a half,” he said. “This allowed me the luxury to pursue particular sounds in detail – for example, I spent eight days trying to perfect my guitar tone for ‘High Landrons.’ Some people might think that’s frivolous, but I was going after that Hendrix sound – to do that, you have to do all the weird effects and get the right alchemy of sounds.”

Ah Via Musicom had a difficult gestation; sessions lasted more than a year during 1988-’89, using Austin-area studios Riverside, Arlyn, and Saucer.

“I did three full versions of the record,” Johnson added. “The first studio was a great place, but I couldn’t get a good live-sounding tone out of my guitar. Everything sounded thin and when you listened back, it sounded too cerebral – like we didn’t let the music happen naturally, which is what we were aiming for.

“By the third version, we started to get good live performances, but I was still dissatisfied. I had originally planned to do the whole thing live, but instead had to overdub certain areas. So, the guitar parts are about 50:50 live versus fixed-up.”

Apart from “Trademark,” “Desert Rose,” and other rock tracks, the cut “Steve’s Boogie” served as a refreshing blast of country-and-western twang. It reminded listeners of Johnson’s Texas roots, as well as his wide-ranging guitar influences.

“I sequenced ‘Steve’s Boogie’ to be an intermission between part one and part two of the album; the song is really a tribute to Steve Hennig, who plays that bendy solo in the middle. He’s a fine player from Austin and has taught me a lot of stuff. Steve also turned me on to other country pickers like Danny Gatton, Jerry Reed, Chet Atkins, and Merle Travis. I also really dig Pat Metheny – and Wes Montgomery’s playing is like everything I ever dreamed of on guitar. And everybody knows how I really feel about Jimi Hendrix. He had the Isley Brothers R&B licks and all that smooth Steve Cropper stuff – then he’d burn with the blues, all with great timing. Jimi was like a drummer on guitar.”

Musicom is also where listeners finally began to understand the scope of Johnson’s guitar vision. Like a Steve Howe or Robert Fripp, he’s a rock player who listened heavily to jazz and fusion, but further possessed a picking hand that rivaled the frightening speed of John McLaughlin.

“I’m on the cusp between a rock player who thinks about scales and a jazzer who thinks about notes and colors over particular chords,” he mused. “I don’t known enough about scales to be really free, but I’m starting to learn notes that take me out of the standard pentatonic thing. They’re not worked out, but the architecture is premeditated. They rise to an arc and then end – as opposed to just stringing a bunch of licks together.” 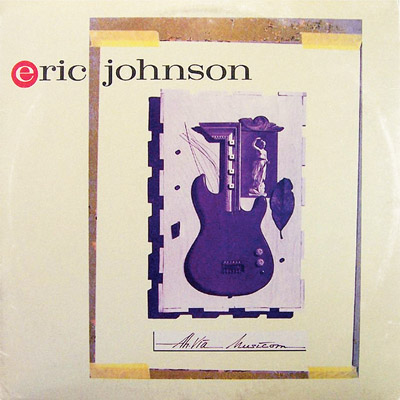 Of course, you can’t talk about Eric Johnson without investigating his notorious tone-factory of gear. For Ah Via Musicom, he used his fabled 1954 and ’58 sunburst Stratocasters, as well as an early-’60s ES-335 for much of “Cliffs of Dover” (along with a Chandler Tube Driver). A Marshall 100-watt half-stack and Maestro Echoplex EP-3 completed the studio rig, and live he also deployed a Howard Dumble head (“It’s like an overgrown Twin with lots of voltage running through it”), through a Marshall 4×12 with a Tube Screamer, Fuzz Face, and MXR digital delay. For clean tones of the period, there were a couple of old Fender Reverbs set about halfway, with a TC Electronic chorus and Echoplex, to help Johnson achieve bell-like chord effects. He also preferred to turn the Marshall’s Presence and Treble knobs down all the way, to help conjure his much-admired violin tone.

Looking back at the album today, Johnson offers new perspective on the wider masterwork, and even humbly admits it achieved a lofty goal.

“Ah Via Musicom was an effort to push myself to make the best record I could at the time,” he told VG. “It was an exhausting effort, but I imagine a lot of people think of it as the best album I’ve done; I was trying to achieve a certain benchmark for guitar playing, and I suppose in some ways it did. I’m proud of it and it really is what I wanted to do – offer something to the art of guitar because it has giving me so much joy, happiness, and inspiration, from all the wonderful players and the instrument in general.”