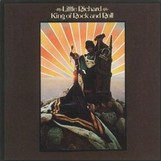 Some 14 years after blasting out of AM radios with hits like “Long Tall Sally,” “Tutti-Fruiti,” and “Slippin’ And Slidin’,” the wildest of rock and roll’s architects enjoyed a resurgence in visibility, when his spangled outfits, over-the-top vanity, and trademark “Shut up!” made him a staple of latenight talk shows.

But he was more than just a nostalgic novelty. In 1970, he moved his music forward. With ears open to more contemporary sounds, he traveled to Muscle Shoals to cut The Rill Thing, in a newly inked deal with Reprise Records.

The funky “Freedom Blues” earned a respectable spot on the charts, while “Greenwood, Mississippi” featured a searing guitar solo from co-composer Travis Wammack (sort of a more crazed version of Lonnie Mack, best known for his instrumental “Scratchy”).

In addition to hip covers of “Lovesick Blues” and “I Saw Her Standing There,” the album includes 10 minutes of the fatback title jam, giving Wammack plenty of room to stretch.

When it failed to launch Richard back to the top, he followed with 1971’s audacious King Of Rock And Roll – actually a safer course, with covers of Three Dog Night, the Temptations, and CCR. If the retreads hadn’t been ganged onto one LP, some could have better distinguished themselves – particularly the romping “Brown Sugar.” Unfortunately, there are no sideman credits on the original or reissue, but there’s fine playing, and Richard is, as ever, in awesome voice.

Ironically, The Second Coming, his last outing for Reprise succeeded best at melding his trademark sound to current trends. Produced by Bumps Blackwell, who helmed Richard’s ’50s Specialty sides, it pairs saxophonist Lee Allen and drummer Earl Palmer (from those classics) with such session stalwarts as bassist Chuck Rainey, guitarists Mike Deasey, Adolph Jacobs, and David T. Walker. Sneaky Pete Kleinow even lends pedal steel to “It Ain’t What You Do,” which he co-penned. An ambitious undertaking worth checking out.

Pat Metheny Group – The Way Up