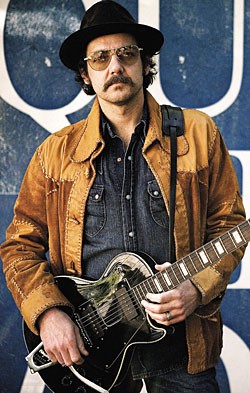 Whenever Marc Ford has held down the guitar chair in a band, whether it’s with the Black Crowes, Ben Harper, or Blue Floyd, people talk about one thing – his sound.

“If you got the tone together, you kind of got half the battle won,” Ford acknowledges. “I think over time, through knowledge and experience, I’ve learned to dial one in really quick. People say no matter what I’m playing, it sounds like me.”

Ford’s sounds are all over his latest solo release, Weary and Wired. For the most part, it’s trio-rock heaven dominated by the former Black Crowes’ blistering guitar playing. That’s not unusual for a record distributed by a division of Mike Varney’s Shrapnel Records. Still, Ford says, Varney let him take a different approach.

“Mike makes a particular kind of record, and I just wasn’t interested in making that, and I told him. He kept coming back and I told him ‘You know, Mike, to be honest, I’m not going to make that many records in my life and I just can’t make one I’m not happy with.’ After some discussion and a few struggles, well… he didn’t hear a note until the end. He pretty much let go and let me do my own thing. I just said ‘Look, I promise I’ll give you a great record.’ And he just said, ‘As long as there’s a lot of guitar.’ And I was ready to make that kind of record.”

One reason Ford was ready was a reunion with Burning Tree bandmates Doni Gray and Mark “Muddy” Dutton. Burning Tree was a trio Ford played with before he joined the Black Crowes. Also contributing to the record was Ford’s son, Elijah, who was 17 when Marc walked in and heard him playing the guitar riff that would drive “1000 Ways” on the new record. “I said, ‘Hey, hey, hey… What was that?’ And I told him he was way too young to be messing with licks like that. ‘I need it!’ So I took it, wrote some more to go with it, and we recorded it the next day.”

Ford’s reputation as a guitar player came from his two stints in the Black Crowes. Some were surprised when he left the second time, but he has made it known he didn’t want the touring and lifestyle to become a threat to his sobriety, which he has had to fight for in the past.

One of the unfortunate aspects of leaving a famous rock band is income levels tend to go down. For that reason, Ford got his famous tone on this record by using different, sometimes unusual, guitars. “Most of my stuff was hung up, so I used what I had at home. I used a nice guitar Bill Asher built for me, and this Höfner I found; I think it’s a Club 40. It’s like a chambered Les Paul, with P-90s and a Bigsby. That guitar just gets some fantastic sounds. I was very limited in what I could use, and it really worked for me. I didn’t worry. It was just like it’s either that one, that one, or that one.”

Ford also uses Reverend guitars on the road, and a ’59 Historic Les Paul. Asked which of his old guitars he misses, he points to his ’63 Tele. “I dearly love that guitar, but it’s hung up somewhere. Over the years, whether I’ve had money or haven’t had money, equipment was always what I bought and it was as an investment so that when times got rough, I’d sell some things off. And there were some phenomenal guitars I’ve had and had to let go… But, you know, they make more.”

He used Roccaforte and Schreyer amps in the studio, as well as his old 50-watt Marshall, and a late-’60s Fender Showman strung together with two or three other amps to get a blend. Effects on the disc include a Fuzz Face, Octavia, and a wah.

Ford and his band are hitting the road, touring Europe first and then the U.S., hoping to capitalize on the buzz the record has created in guitar circles. He’s also hoping to do some more producing in the future; he has produced recent records by the Pawnshop Kings and Ryan Bingham, and says he’s looking forward to doing more.

“It’s something I love, and I’d like to generate more money and not have to be on the road my whole life.”

Listeners will also notice the blossoming of a fine singer and songwriter as they listen to Weary and Wired. Ford’s influences in those fields are as strong as his guitar influences.

“I listen to songwriters more than singers. I love Dylan, Neil Young, and people who have wonderful lyrics and can convey a mood and are honest. As a singer, though, I finally have come to a place where I can enjoy singing.” And fronting the new group is a marked departure from his days in the Crowes. “I was a sideman, and really just stayed out of the way. I didn’t think about being out front. This is very dear to me and there are some songs that have been waiting around to have a home. You know, with my sobriety, it just came to a point where I was totally prepared to do this. I’m playing better and just being so much more productive.”


This article originally appeared in VG‘s July 2007 issue. All copyrights are by the author and Vintage Guitar magazine. Unauthorized replication or use is strictly prohibited.
Marc Ford Band