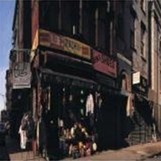 This groundbreaking album needs little introduction – except maybe to guitarheads.

Yes, it’s rap, but the Beastie Boys showed the world what composing with sound samples can create. Here’s a primal fusion of rock and roll, metal, punk, reggae, country, and more, all wrapped in a modern street-fighting man’s take on teenage rebellion. Listen closely and you’ll hear snatches of Led Zeppelin, Johnny Cash, the Ramones, Pink Floyd, Bob Marley, and too many more to count.

So, what does this 20th Anniversary Edition of a classic have to offer? Start with killer packaging in its oh-socool panoramic street photography, expanding the cover image to a full cityscape. Then, there’s the inclusion of a full lyics booklet. But the icing is the
remastered sound with both improved clarity and more bass.

Paul’s Boutique is not only a hiphop landmark, it’s an inspiring guitar album, too. This is rap’s Pet Sounds, and you should be listening.