Home Music Albert Castiglia – These Are The Days 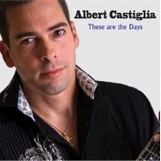 New York-born/Miami-raised Albert Castiglia is primarily, and by instinct, a blues man. But on his third album the one-time member of Junior Wells’ band displays a wide stylistic versatility along with his considerable guitar chops. As a singer, he sounds so much like John Hiatt in that when he steps slightly to the left of the blues and launches into fellow Miami musician Graham Wood Drout’s Hiatt-like “Celebration,” it inspires a label check.

Castiglia the songwriter shows a knowing grasp of the blues’ variations and nuances and an instinctive feel for what works. This is no one-note man. His “Twister” is a gritty delta-style grinder for the 21st century and he skillfully folds a modern songwriting sensibility and wit into tunes like “Bad Year Blues” without giving any impression of trying to fix what ain’t broken.
The Cuban/Italian Castiglia doesn’t exactly fall into the category of young frat kids who think the vintage Strat and retro amp their daddies bought them combined with adopting a Ricki Lee Jones minstrel-like vocal style make them gen-u-whine blues men. When he sings “gots to” in
“Bad Year” it’s probably a habit he picked up hanging out with Junior.

Whether his Hagstrom is set on maximum overdrive (as on “Twister”) or he’s more low-key (as on Bob Dylan and Jacques Levy’s “Catfish”) and sounding a lot like the Vanguard label folk-blues recordings of the early 1960s, Castiglia, abetted by a first – class band, is always in command. Keyboardist Susan Luther especially helps make the group come off like one of those hard-playing New Orleans bands working Tipitina’s or the Old Absinthe House – likely to jump from Howlin’ Wolf to Hoagy Carmichael with Hank Williams in-between.

When Castiglia embraces blues standards, chestnuts like “Loan Me A Dime” or “Night Time Is the Right Time” it’s just that-an embrace. His unabashed love and respect for the music is lit large. Albert Castiglia is acolyte, priest and proselytizer for America’s great native music. He’s been well schooled and These Are The Days shows he’s more than fit for the part.

This article originally appeared in VG‘s June. ’08 issue. All copyrights are by the author and Vintage Guitar magazine. Unauthorized replication or use is strictly prohibited.

Barrence Whitfield and the Savages