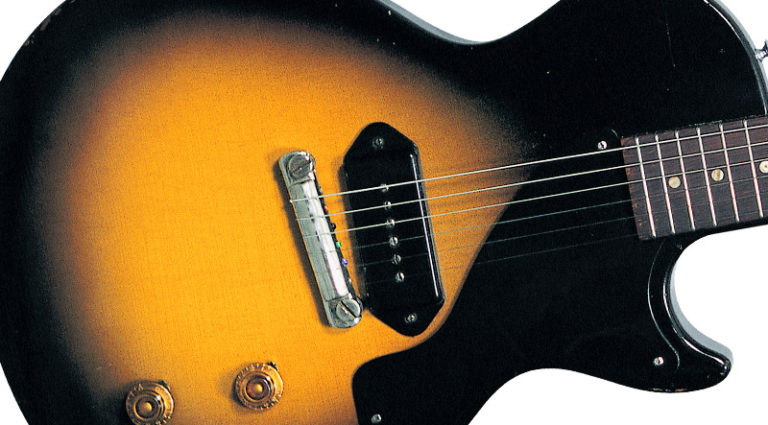 In 1952, Gibson’s Les Paul model guitar was brand spanking new.  But it wasn’t cutting-edge. True, it was the company’s first solidbody electric guitar, and thus earned a bit of notoriety. But just being Gibson’s first solidbody didn’t win it any real accolades. After all, Leo Fender’s Broadcaster and Telecaster models accomplished the same duties almost two years before the Les Paul came along.

One thing it did exude that Leo’s guitar didn’t was an upscale sensibility, with its set neck, subtle top contour (implying “violin”), and dressed-to-the-nines gold finish with white trim. And it was priced accordingly. At $210, it set you back 10 percent more than did the Telecaster, despite having what some would argue was an inferior tailpiece.

It didn’t take Gibson long to figure out that a cheaper alternative would be a good thing. So in 1954, it introduced the Les Paul Junior. Designed to offer good playability and sound at considerably lower price ($99.50 versus the ’54 goldtop’s $225 price tag), the Junior was aimed at beginners and/or the budget-conscious, with its single P-90 pickup, “slab” (devoid of carve) mahogany body, unbound body/neck/headstock, and dot-inlaid fingerboard.

Response to the guitar was very strong, and by its second year of production it was Gibson’s most popular instrument; 2,839 were built in 1955, and throughout the four-and-a-half-year run of the Junior as a single-cut guitar (and even into its double-cut era), it never relinquished claim to that title.

Fast forward to the 1990s; fueled by classic rock guitarists noted for their tone, guitar collectors begin to clamor for the Junior, citing its playability and simple volume/tone operation – and the growl of its dog-ear P-90. Ladies  and gents, here, in detail, is Gibson’s 1955-mid-’58 Les Paul Junior!

Special thanks to Gregg Levy and Phil Jones.