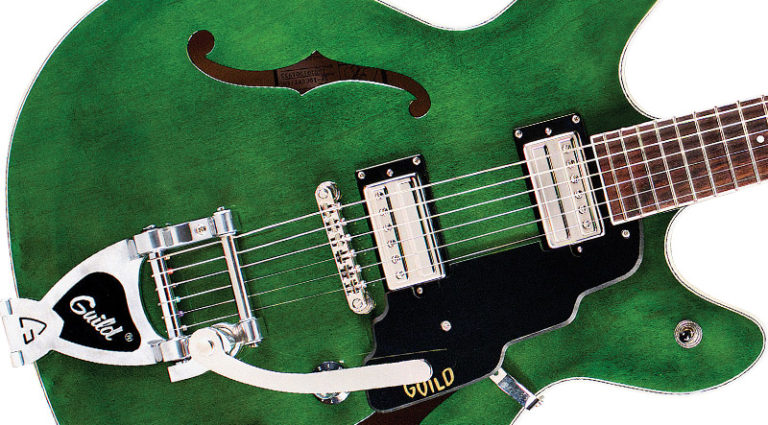 Guild’s Newark Street guitars are a line of lower-priced instruments anchored by a reissue of the classic Starfire; the most distinctive is the I DC GVT.

A handsome semi-hollow, it sports an arched top and back with a mahogany center block and is powered by Guild’s HB-2 Alnico II humbucking pickups with coil splitting for each (a handy feature).

The Starfire is highly playable, with a thin U-shaped neck that meets the body at the 18th fret for easy access to the rosewood fretboard’s upper reaches. It balances well, too, and extreme string bends are effortless all along the 24.75″ scale.

Plugged into a vintage Ampeg Reverberocket, the HB-2s sounded exemplary in both double- and single-coil mode, helping the Starfire to serve as six-string jack of all trades, capable of handling just about anything thrown its way – blues, various rock genres, Americana, country, R&B; even mellow jazzy chords were easy.

With added overdrive or distortion, the guitar comes to life. The Bigsby (source of the “GVT” handle – Guild vibrato tailpiece) has a roller tension bar where a roller bridge would almost certainly make for better tuning stability. Still, attention to detail on this guitar is otherwise evident throughout. Fit, finish, and fretwork were impeccable, with no sharp fret ends or dead spots. Most impressive were the neatly finished sound holes, which too often are poorly executed.

Offered in Emerald Green or Pelham Blue, the Guild Starfire I DC GVT arrives at an attractive price given its quality and performance. In a field crowded by semi-hollow choices, it stands apart.