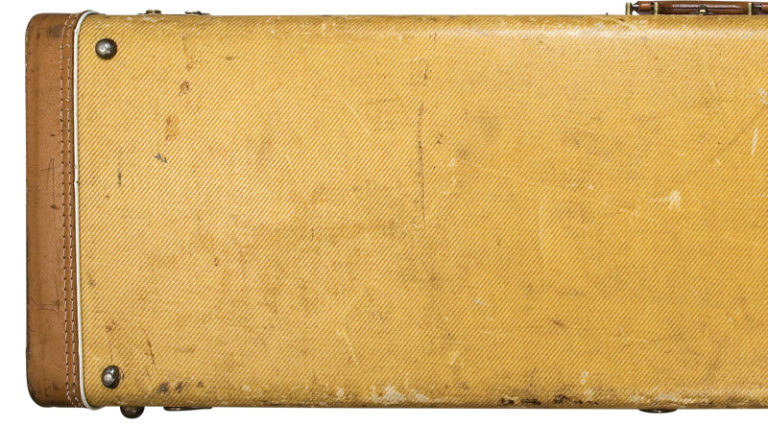 Some of my vintage guitar cases are very worn. One Martin case from the ’40s is missing a latch and the handle is falling apart. I have newer, better cases for everyday use, but I’m concerned that repairing the originals would devalue the appeal of the “guitar with original case” package if I sell. Should I leave them alone or fix them? – Terry White

When used for their intended purpose, cases are subject to much more wear and tear than the instruments, so it’s expected they will be in less-than-pristine condition, especially if used in a touring/traveling situation. And while collectors prefer instruments in fine original condition and with original cases, as time goes on it becomes increasingly unrealistic to expect them to be in pristine condition.

Original cases are valuable enough that it often makes sense to purchase a heavy-duty modern case for everyday use and set the original aside to keep it as pristine as possible. If a case shows heavy wear but is strong and fully functional, we don’t recommend reworking it to look new. But, if it’s damaged and nonfunctional, we do recommend restoring or repairing it as well as possible to original specifications. If a handle, latch, or hinge is missing or broken and renders a case unusable, replace it with an original part or a modern replica of the same size and shape that does not require irreversible change to the case or instrument. Restoration will not give a case the same value as a pristine example, but when done to professional standards of quality, it greatly enhances the value compared to being nonfunctional.

Modern cases designed to withstand professional use on the road are stronger and much more functional than any vintage case. Professional musicians would do well to leave originals at home and travel with the strongest possible cases, which will offer far greater protection.

When and why should owners of vintage instruments have them appraised? – Elisa S.
If you’re unsure of their value, of course it makes sense to have instruments appraised before selling them. Or, if you’re considering the purchase of a high-value instrument from someone who’s not a knowledgeable dealer with a reputation for integrity, it also makes sense to have an independent appraisal, just as one would before purchasing a house. Obtaining an appraisal from a qualified appraiser helps avoid serious errors.

Most insurance companies will not provide coverage unless an instrument has been appraised. Appraisals are also critically important for estate planning and when instruments are acquired by inheritance. If instruments are donated to a museum or a charitable cause and the owner wishes to receive a tax exemption, it is essential to have an appraisal.

An appraisal is much more than a brief statement of monetary value, and not all appraisals are equally valid. Many manufacturers and insurance companies will recommend appraisers they know and trust. A qualified appraiser will examine an instrument to determine and certify exactly what it is. New instruments in pristine condition are simple to appraise, especially if recently purchased from the builder or a franchised dealer, but used and vintage instruments must be inspected with great care to be certain that they are authentic and in fine condition. If they’ve been modified, the value may be very significantly reduced.

High-dollar instruments are widely copied, so it’s important to determine that they are in fact what they appear to be. Just as the vast majority of violins with labels stating the name of famous makers such as Stradivarius are copies, high-dollar instruments such as 1958-’60 Gibson sunburst Les Paul Standards, Flying V and Explorer models, as well as early Gibson F-5 mandolins and flathead five-string Mastertone banjos are very widely copied such that some are composites of old and new parts. Many others are outright forgeries.

A qualified appraiser must study an instrument much the way a zoological or botanical taxonomist studies an animal or plant to determine its species and subspecies. The appraiser must also do the equivalent of a pathological forensic exam to determine what exactly has happened from manufacturing to the moment of inspection to a particular instrument. It’s not simply a matter of determining how much playing wear it may have, but also how much damage has occurred over the years and how much and how well it has been repaired or altered.

The examination to determine exactly what an instrument is and how much it has been modified is far more time-consuming and takes far greater skill than simply putting a price tag on it. Anyone who owns high-dollar instruments should have them appraised whether they wish to sell them or not, because without an appraisal they cannot be insured. Regardless of whether the owner wishes to sell them, the likelihood is that instruments will have a far greater lifespan than any human owner. With proper care instruments can last hundreds of years. Inevitably, they will change hands, but without appraisals, the owner and future owners may not benefit as they would have if they’d had the instruments professionally appraised.

Since condition of instruments and their values can change over time, insurance providers require appraisals updates as often as every five years, but updating a professionally done appraisal is much simpler and less expensive than obtaining a complete new appraisal.

This column addresses questions about features and model changes on stringed instruments, information on manufacturers, driving forces in the marketplace, the effects of technology on music, and any other related subject. Questions can be sent to vguitar@vintageguitar.com with “Gruhn Q&A” in the subject line.

George Gruhn has been part of the Nashville music scene for more than 50 years. He moved to Nashville in 1969 after getting his Bachelor’s Degree from the University of Chicago and doing graduate work at Duke University and the University of Tennessee in Knoxville. In 1970, he established Gruhn Guitars, Inc., one of the largest dealers of vintage and used instruments in the world.