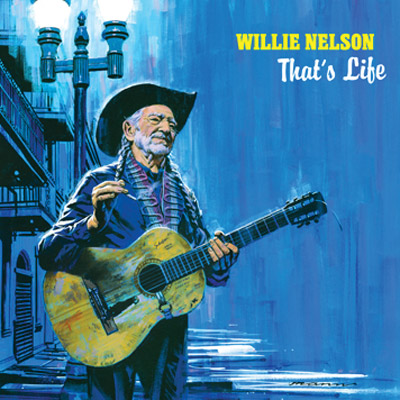 My Way, Willie’s 2018 Grammy-winning Frank Sinatra homage, clearly didn’t satiate his desire to explore songs by the vocalist whose style profoundly influenced his own. With the same co-producers (Buddy Cannon and keyboardist Matt Rollings) and many of the same musicians, he interprets 11 more songs on his terms. To his credit, he avoided the original, now-iconic ’50s and ’60s arrangements by Nelson Riddle and others.

Nearing 88, his voice is a bit rougher but Willie’s distinctive phrasing remains. He thrives in the jazzier settings, dominated by Rollings, L.A. guitarist Dean Parks, Nashville pedal-steel master Paul Franklin and, of course, Trigger. An easygoing “Nice Work if You Can Get It” features a supple, boppish Franklin break. Parks injects a solid solo into an aggressive “I’ve Got You Under My Skin.” Trigger emerges on “You Make Me Feel So Young” and the stomping, gospel-flavored “Lonesome Road.”

On “That’s Life,” he adheres more faithfully to Sinatra’s R&B treatment (the only way to sing it), enlivened by Mickey Raphael’s harmonica and Franklin. Franklin and Parks subtly accent and embellish the Latin-flavored big-band arrangement of “Luck Be a Lady,” with Franklin uncorking another brief (but focused) chorus, much the way he does on “Learnin’ the Blues.”