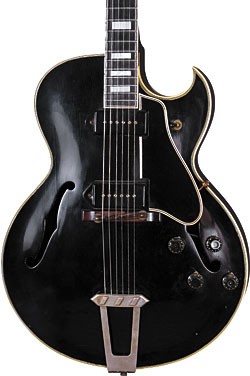 From Gibson’s early years through the 1960s, the company made many custom instruments that mixed and matched specifications from various models. Few have been as intriguing as this custom ES-175 from 1955, made for musician Andy Nelson.

The guitar itself is interesting enough, even without a connection to a player. Serial number A-20852 puts it in 1955. The label says “ES-175 SPEC,” and the special features start with the body. The 16″ body with Florentine pointed cutaway would appear to be an ES-175D (D for double-pickup) or an ES-225TD, which was built as a thinline version of the 175; no other Gibson electrics had a pointed cutaway until 1960. The double-pickup ES-225TD didn’t appear until 1956, so unless this was an early example that didn’t ship until ’56, ES-175D seems to be the only possibility.

The body, however, is 211/2″ deep. That’s a full inch shallower than the standard ES-175 but almost an inch deeper than the thinline ES-225T (single-pickup) and ES-350T that Gibson introduced in 1955. It’s only a 1/4″ deeper than the Byrdland, the short-scale, thinner-bodied version of the ES-5 that was also introduced in ’55. Apparently, Billy Byrd and Hank Garland (for whom the Byrdland was named) were not the only musicians who thought a medium-depth guitar would be the most comfortable.

The ornamentation is obviously custom – for an ES-175, that is. It would be completely standard on a Les Paul Custom, which had been introduced only a year earlier. Standard custom specs include the black finish, multi-layered binding, mother-of-pearl block fingerboard inlays, and five-piece split-diamond peghead inlay.

Again, the mixing of model specs is nothing unusual for Gibson. In the 1970s, Gibson even did it on official models, such as the Super V (an L-5CES with Super 400 neck) or the Les Paul Artisan (which featured banjo-style hearts & flowers on the fingerboard). In that context, this mid-depth ES-175 with Les Paul Custom ornamentation is a rather typical custom order. Gibson’s ledger books, however, tell a much more interesting story.

Special Wurlitzer
The Rudolph Wurlitzer company may be best known today for jukeboxes, pianos, and the Mighty Wurlitzer theater organs, but in the mid 20th century, Wurlitzer was a full-line musical instrument distributor and retailer. The Martin company made special guitars for Wurlitzer in the 1920s. In 1955, Martin made some 12-fret solid-peghead models for a different Wurlitzer, the E.U. Wurlitzer store in Boston; those models led to the D-28SW and D-35SW models, with SW designating “Special Wurlitzer.” Coincidentally, Gibson president Ted McCarty had worked for Rudolph Wurlitzer before coming to Gibson, but we’re not aware of any guitars that Gibson might have made for Wurlitzer.

WBBM
This Chicago radio station, AM 790, has had a news-talk format for over 35 years now, but in 1934 it introduced Chicago to a country singer named Sunny Joe Wolverton and his hotshot guitarist, Rhubarb Red, later to be known as Les Paul. It’s reasonable to assume that WBBM still served up music in ’55, but any connection to Wurlitzer, or to Andy Nelson, is unknown.

Nelson is not unknown in Gibson history of the 1950s and ’60s. Born in 1921, he grew up in Chicago, where he was making a living playing guitar in clubs while still a teenager. After World War II, he traded one or more of his three Gibson ES-150s for a blond cutaway L-5 and promptly customized it by adding an ES-150 “Charlie Christian” pickup. It would be the first of many custom guitars for Nelson.

Through the first half of the ’50s, he played with a music/comedy act called the Tune Toppers. His decision in ’55 to leave the band (and road work) was pivotal to his career. He quickly worked his way into recording sessions, including what would become one of the biggest hits of 1956 – “The Auctioneer,” by Leroy Van Dyke. He also landed a position as bass player in the staff band at Chicago’s WGN.

Nelson had been playing a single-pickup blond ES-175 and an ES-295 (essentially a gold-finished, two-pickup version of the ES-175). Gibson introduced the fancy black-finished Les Paul Custom in 1954, and sometime in ’55 Nelson custom-ordered his thinner ES-175 trimmed out like the high-end Les Paul. Why it was logged in as Special Wurlitzer – WBBN is a matter for speculation. It’s possible that Nelson had a spot on WBBN that Wurlitzer sponsored, or that he was pitching a custom Gibson model to Wurlitzer. What is certain is that Nelson received the guitar and liked it enough to hold it in a studio portrait. The photo is included in a book about Nelson, written and published by his nephew, Lawrence Grinnell. 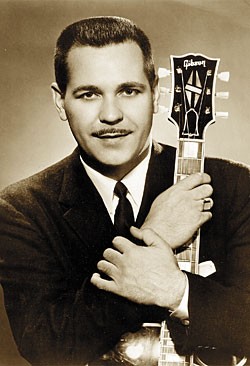 The most important event of ’55 for Nelson came when he was hired by Gibson as a clinician, a job that expanded in ’57 to include sales. Gibson got more than they bargained for, as Nelson was constantly coming up with new ideas. He was the driving force behind Gibson’s first amps with reverb. He came up with L-5CT, a thinbody, shorter-scale (243/4″) version of the L-5C, for comedian/musician George Gobel. He was the “poster boy” for Gibson’s semi-hollowbody line of ’58, appearing in literature playing an ES-355 – customized (or possibly a prototype) with an L-5-style flowerpot inlay on the headstock, rather than the standard split-diamond.

In 1962, Gibson made Nelson an Epiphone salesman. His first good guitar had been an Epiphone Triumph, and he threw himself into the job. He sketched out an entire new line of Epiphones, including a highly ornamented flat-top called the Excellente. By Nelson’s account, he was too successful with Epiphone, to the point that Gibson president Ted McCarty felt that Epi was threatening Gibson’s prestige. Nelson resigned in frustration in ’65 and went to work for Fender. A heart attack in 1970 forced him into early retirement, and he played only for recreation from then until his death in 1995.

The custom black ES-175 remains a part of Andy Nelson’s legacy, and it has recently taken a place in another famous legacy. Somewhere along the way, Nelson parted with it, and it ended up in an Ohio music store, where it was discovered and purchased last year by Nashville artist Shelton Williams, a.k.a. third-generation country star Hank Williams III. 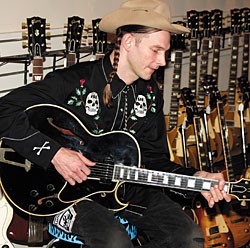 
Son of a superstar, grandson of a legend, Shelton Hank Williams III first played in public when he jumped behind the drum kit with Bocephus’ band at the tender age of 10. And though one would think his pedigree had him following in his daddy’s bootsteps, the youngest Hank was much more about Black Sabbath, Kiss, and Ted Nugent.

From his teens through today, the 36-year-old Williams has spent time in several bands, always flaunting a penchant for raw musical diversity; he has long played drums in punk bands, and today does so for the punk-metallers Arson Anthem, which is fronted by former Pantera vocalist Phil Anselmo. Williams also fronts his own group, which in the course of a gig transforms from playing neo-traditionalist country/rockabilly as Damn Band to (with minor personnel and equipment changes) to cramming all-out punk as Assjack.

Williams’ most recent album, 2008’s Damn Right, Rebel Proud, became the third of his five albums to reach Top 20 on the country charts, peaking at number two. Currently on tour (though probably not with the Gibson ES-175 Special Wurlitzer!). His tour schedule and other info is available at hank3.com. – Ward Meeker


This article originally appeared in VG‘s May 2009 issue. All copyrights are by the author and Vintage Guitar magazine. Unauthorized replication or use is strictly prohibited.
The New Gear Yearbook