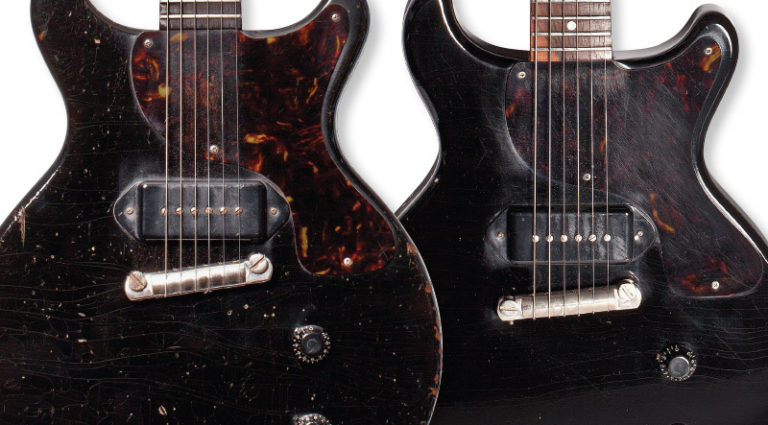 Guitar dealers tell guitar stories much like anglers tell fish stories. There are those they “got” and those that got away, and either can render reactions ranging from a sigh to a gasp to a hearty belly laugh – often at the dealer’s expense. This is the story of a got – or two.

In the summer of 2010, Dave Hinson, proprietor of Killer Vintage, St. Louis, took a phone call from a local customer who had spotted an ad online describing a “Black Les Paul Junior” for sale in a town about 150 miles away. Like any dealer worth his salt, Hinson snapped to attention, jumped online to pull up the ad, then made a call.

“The guy told me he got the guitar in the mid ’90s from his uncle, who is a retired state patrolman,” Hinson recalled. “All he really knew was that his uncle had acquired it in the ’70s from a band in Arkansas.”

Plans were made for the men to meet halfway to give Hinson a look-see.

“I knew at first glance it was real,” he said. “It had a perfect neck-set and no changes or repairs. It does look as if it had been knocked around more than played, but I paid his asking price and told him, straight up, that it was worth more. But he wasn’t a player and said he needed the money.”

Made in late 1959, the guitar bears serial number 9 32517. And while Gibson certainly produced its share of black instruments, ranging from mandolins to the original Les Paul Custom (in the color preferred by the man himself, Les Paul) to the Everly Brothers Flattop, for Hinson and every other dealer and expert with whom he shared pictures, this was a first. 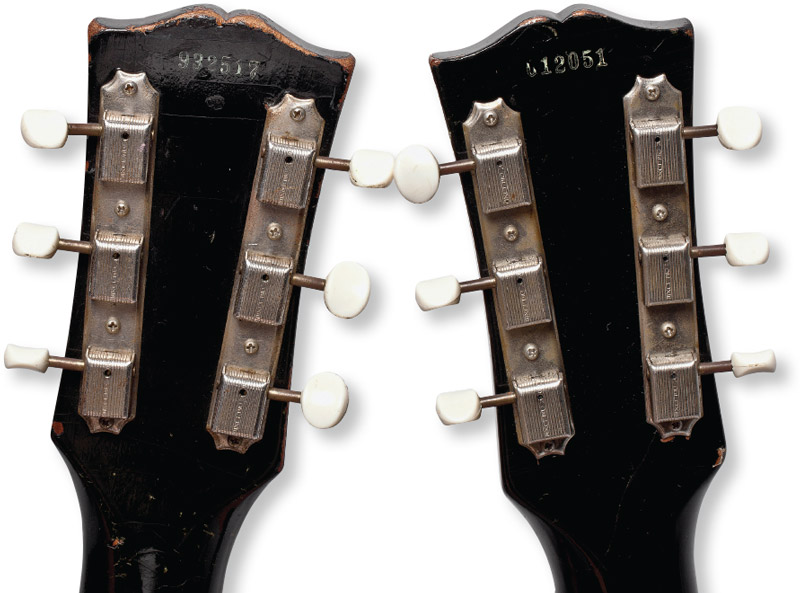 “In 40-plus years of digging up and dealing guitars, I had never seen a black Junior,” he said. “And when I showed it to several dealers and experts, such as Kurt Linhof, Dave Belzer, Dave Crocker, and a few more, they agreed it was real and none had ever seen one before. It was a reaction like ‘I’ll be damned!’ Just slightly more subdued than ‘Holy s***!’ You get the idea… Basically, ‘Wow!’

“It’s from the period when the Epiphone Coronet was given a slab body, and most of those were black with white pickguards,” he said, recalling his rationale. “So it may have been a special order – or a screw-up – who knows? But, since Gibson did Coronets in black, it made sense there would be more Juniors. I had also heard rumors of a store somewhere that ordered a lot of black Gibson guitars. I have no evidence of that, but it’s part of the folklore.”

After the score, Hinson went about his business, proud new owner of a funky guitar he figured would hang as a unique piece in his permanent collection alongside other prizes like a 1960 Gibson ES-335, a natural-finish ’66 Epiphone Sheraton, ’60 Tele Custom, ’64 Epi Crestwood Deluxe with white finish, ’52 Fender Esquire, several other Les Paul Juniors, a ’60 Les Paul TV Special, 1940 D’Angelico Style A, and a ’66 Fender Jazz Bass in Olympic White with matching headstock, to name just a few. “I only keep guitars I can use on gigs,” he said of his stuff. “None are museum pieces, but all are great players”

Just more than a year later, another guitar came calling.

“A few months after I had shown him pictures of the ’59, my friend Ken Daniels, at Truetone Music, called to tell me he had found a 1960 Junior with black finish, and he thought I should have it.”
The ’60 is “very clean, with minimal signs of use,” Hinson said. “It’s also late-year production, so like the ’59, it has the extra digit in its serial number – 0 12051.” And though its finish is in markedly better shape, it has a minor headstock crack that was professionally repaired long ago, with no touch-up paint. “Even with the repair, I knew I had to have it,” Hinson said.

Neither guitar shows any sign of being oversprayed or ever having a different finish. “They were likely just custom-orders,” Hinson theorized. “It does take a minute to get used to looking at black with a tortoiseshell pickguard – it just seems odd at first. But it does not take all that long to come to the conclusion that they’re just extremely cool!”

“Anyone who has ever dug into the company’s production practices knows that you never say ‘never’ when it comes to Gibson,” he said. “The archives show all kinds of oddities, from an electric mandocello to double-pickguard flat-tops. Unfortunately, the daily shipping logs from mid 1958 through 1960 are missing, so these guitars aren’t documented in Gibson’s archives. 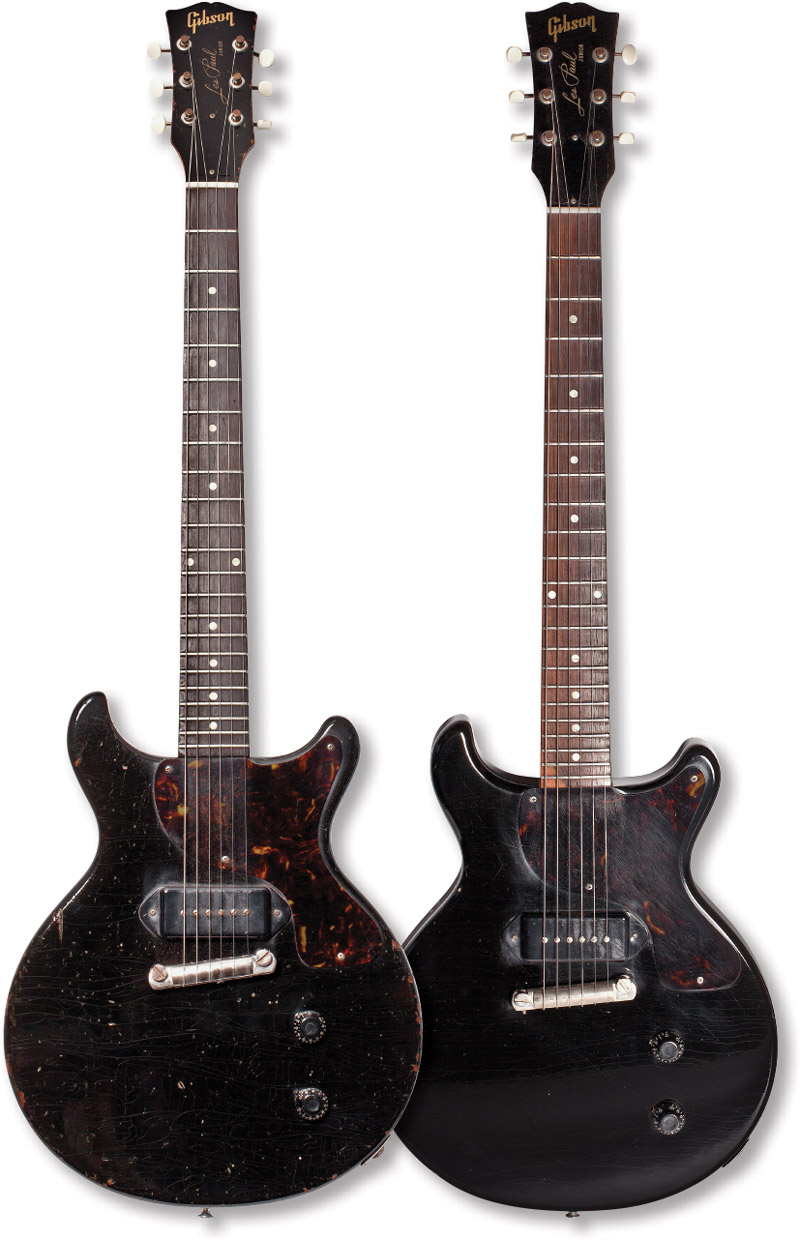 “In addition to the possibility of a custom order, you always have to keep in mind that Gibson was a company trying to make a profit, and the fewer guitars they had to throw away, the more profit they would make,” he added. “A black finish can cover a variety of mistakes or blemished wood. It’s not at all surprising that a black Junior – or even two of them – would be discovered. If anything, I’m surprised more haven’t turned up.”
Why Gibson didn’t offer black as an option on the Junior is a mystery likely to go unsolved. But the company’s Custom Shop has expressed interest in creating a black-finish Junior “reissue” using these two as models.

Today, Hinson says, both guitars are “…resting carefully, ready to be unleashed on any tube amp, with pent-up vengeance for all those years they didn’t get played!
“I hope there are more out there,” he said. “I’ve been telling people to start digging through their closets… But maybe I shouldn’t!”
In late 2016, Gibson re-created the 1959 Junior as part of its Collectors Choice series.

“It turned out to be the darling of the ’17 Winter NAMM show,” Hinson noted. “They’d planned to make 300 of them, but the project was derailed by Gibson’s bankruptcy and only 75 to 80 were made. It’s frighteningly accurate and came very close to the exact tone feel and look of the original.”