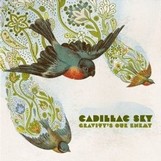 Though they call their music “outlaw acoustic” and they include Radiohead
and Gnarles Barkley along with Earl Scruggs and Alison Krauss as inspirations, Cadillac Sky’s music is far closer to roots bluegrass than pop poop.

This five-piece band is fronted by 33-year-old mandolinist/vocalist Bryan
Simpson, who wrote 11 of the 14 songs here. He’s joined by Matt Menfee on banjo, piano, and vocals, Mike Jump on guitar and vocals, Ross Holmes on fiddle, viola, guitar and vocals, and Andy Moritz on upright bass, cello,
and vocals. While they may be acoustic bluegrass musicians, they draw heavily from contemporary culture. And while the band’s spiritual center may guide their music and their lives, it’s not worn on their sleeves; Gravity’s Our Enemy hasn’t a single hymn, gospel song, or mention of the big fellow upstairs. The band admits to having progressive leanings, but also notes that it is “trying to find our own voice and not be flimsy retreads of New Grass Revival or Nickel Creek.” Unlike those bands, Cadillac Sky has a more gritty organic and macho edge. Instead of “Ode to a Butterfly,” Cadillac Sky serves up “The Wreck” and “Thank You Esteban.” The latter is a romping instrumental that has nothing to do with the late-night infomercial guitar-slinger, but does have a rolling melody line as fluid as Nickel Creek’s “Ode.”

Bill Monroe often talked about how bluegrass music had to evolve to
remain vibrant, and Cadillac Sky may be the first true 21st-century bluegrass band. Its music embraces all the traditional fundamentals but includes and acknowledges today’s technological world. This combination produces music every bit as powerful as anything from the Big Mon himself.