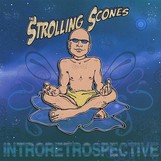 The Strolling Scones recreate a ’60s vibe while writing songs that are fresh and new. For instance, if the 12-string on “Any Time She Passes By” doesn’t bring to mind the Byrds, you’ve never heard the Byrds. “Lifeguard at Bikini Beach” has a great lyric and tremoloed intro with vocals that sound straight out of a John Phillips arrangement. “Takin’ ‘Em On” is a sort of psychedelic rave-up that has contributions from a wah’d guitar, a steel guitar, and what sounds like a five-string banjo. It’s imaginative even as it looks back.

There are also funky rockers like “Trim Rigged Cat.” The goofy lyrics and retro-aural experimentation is further evident on songs like “Medicine Man,” which appears to be an anti-drug message. It and others have Rick Stockton playing sitar to great effect beyond simply providing the ’60s feel. Stockton’s guitar work is first-class throughout, whether evoking jangly folk-rock (“You Better Hold On”) or blues-rock (“Gypsy Fever”).

Vocals are handled by several bandmates, male and female, who also do well recreating the ’60s vibe with glorious harmonies that bring to mind the best of that bygone era while still sounding new and fresh.

It’s easy to be cynical about the concept here, but one listen puts that to rest. It’s good “new” music that recalls a past time.