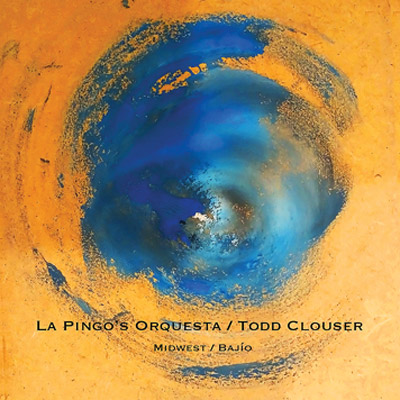 While terms like “uncategorizable” are overused and cliche to the point of being meaningless, this soundtrack in search of a movie is altogether original and fresh.

Clouser, an American living in Mexico, keeps busy in numerous configurations, most notably A Love Electric. La Pingo’s Orquesta, hailing from the Mexican state of Aguascalientes, incorporates clarinet, violin, and trumpet, along with the typical guitar/bass/drums rhythm section, but without keyboards.

Mostly instrumental, this eclectic collaboration embraces jazz, rock, folk, twang, and more. Though it opens the program, “Girls” is a perfect cinematic closer, highlighting Clouser’s melodic simplicity. The jumpy “Surf” is reminiscent of the frantic Indian dance music in Ghost World, while the noir “Collective Memory” would fit perfectly in Taxi Driver. And “Canicas” shifts from a heavy push-pull feel to a sprightly mariachi-meets-klezmer beat, then back for an ascending Clouser solo that’s bluesy but angular.

Playing a Gibson ES-335 through a ’60s Fender Twin, Clouser sometimes summons a tone as crystalline as any Fender axe. He judiciously employs effects (mostly by Earthquaker) that enhance his sound without overpowering it.

In the mood for something new and off the beaten path? Check this out.

Bernie Williams – The Journey Within