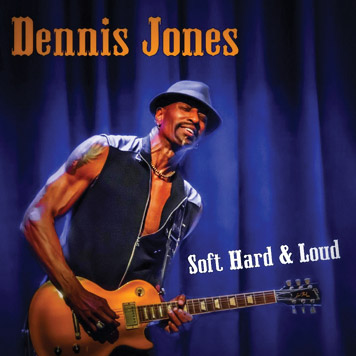 On Soft Hard & Loud, Dennis Jones continues to push the boundaries of blues-rock guitar. With lyrics saturated by the cold, hard slap of reality and a love of black musical repertoire, Jones gets down and greasy. It displays the connective tissue between blues, rock, reggae, and R&B. Traditional earmarks intertwine with a unique and fiery thumbprint on guitar. On “Like Sheep,” distorted riffs and heavy rock soloing offset indictments of American ignorance.

Soft Hard & Loud is blues-based black rock. It’s a rollercoaster ride that tackles the themes of love, hate, obsession, and a turbulent social climate. A goldtop Les Paul is Jones’ weapon of choice. From the clean ’60s R&B of “Nothin’ On You” to the crunch of “When I Wake Up,” Jones turns up the intensity. He repurposes a cool rockabilly drum groove and bends it to his will on “Burn The Plantation Down.” It’s an uptempo rockin’ memoir from a slave’s perspective with a pop-punk bridge, sinewy licks, and big double-stop blues bends.

The rhythm section kills as they shift grooves effortlessly, but at the album’s core, Dennis Jones loves the blues.