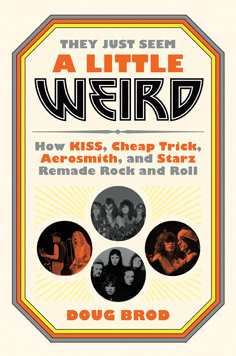 This book connects the dots among four bands that emerged in the ’70s, describing how Aerosmith’s Joe Perry, Cheap Trick’s Rick Nielsen, and Starz’s Richie Ranno played guitar on Kiss vocalist/bassist Gene Simmons’ scattershot 1978 solo album. The author covers well-known ground on the bands’ formations, but fills in details about their burgeoning careers. Three years earlier, Ranno even had a premonition he’d play on Simmons’ album and in fact he’s the only guitarist on “Tunnel of Love” (Perry and Jeff “Skunk” Baxter are credited, but Gene didn’t use their parts).

Another good story: At his 50th birthday party in 2000, Joe Perry received the ’59 Les Paul Standard he sold during lean times 20 years earlier, as a gift from reluctant then-owner Slash.