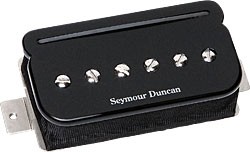 Seymour Duncan’s new P-Rails pickup is a P-90 with a slim rail-style coil tucked in next to it, designed to fit into a standard humbucker ring.

Coupled with a standard three-way mini on/off toggle switch, the P-Rails are designed to produce tones including traditional P-90, rail, single-coil, or humbucker – all in a single pickup. Combine two P-Rails, each with a three-way mini toggle in a two-pickup guitar with a three-way pickup selector and you’ll have 15 pickup combinations! But do the P-Rails do justice to all three pickup types?

The P-Rails are sold in bridge and neck versions, and the only significant difference between them is the pole spacing and their flipped coils.

Mounted in a 24.5″-scale solidbody wired with a pair of three-way mini toggle switches, and running through a 20-watt EL84-equipped amp and 2×12″ cab, running both P-Rails at once produces a classic, midrange-packed humbucker tone with a fairly high output. Separately, the bridge unit offers thick, punchy tone with the amp turned all the way up, while the neck unit excels in making jazzier tones – round and dark, especially with the guitar’s Volume and Tone controls backed down.

In single-coil/rail mode, both P-Rails produce a usable vintage Strat/Melody Maker tone with slightly less gain and midrange than the P-90 coil. Having the lower-output rail/single-coil on the inside and the hotter P-90 on the outside (mirror image) helps maintain balance between the coils. Having the bridge rail further from the bridge itself keeps it from sounding thin and weak, while pushing the P-90 closer to the bridge helps it produce that punchy low-end and midrange.

The greatest benefit with the P-Rails versus a standard single-voiced set of pickups, or even a set of regular humbuckers with traditional coil splitters, becomes apparent in the middle position, where you can mix combinations (i.e. humbucker and P-90, humbucker and single-coil, P-90 and single-coil) to get just the right sparkle, cut, and fullness. With a total of nine combinations in the middle position, the variety of usable sounds is impressive; at times, the differences are subtle, but still very worthy of exploration.

The P-Rails offer so many tonal possibilities; in a hum/single/hum guitar you’ll have nearly 30 combinations. In the neck position of a Fat Tele, they’ll push the combination from three to seven. And in a dual-humbucker guitar with individual volume and tone controls (our tester had just one of each), the possibilities would be greatly expanded. The Seymour Duncan P-Rails cover three pickup styles very well, don’t require major modification to your axe, and tremendously expand its tonal possibilities.