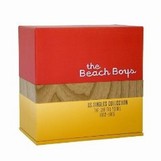 At this point, there are far more retrospectives of the Beach Boys than original albums. Their catalog has been recycled in every way imaginable. Or so one would have thought.

Any new wrinkle comes down to packaging. So Capitol pressed up 16 CD singles (with three to eight, in the case of their 1964 Four By The Beach Boys EP, cuts per disc), each with reproductions of the vinyl singles’ original artwork and most songs in both mono and stereo, including some new mixes. The box also includes a 56-page, hard-cover photo book, but no liner notes.

This is obviously aimed at avid collectors, and even they will most likely be a bit disappointed, as Beatles fanatics were with IThe Capitol Album, Vols. 1 and 2. The Fab Four boxes chronicled the American editions of their albums, but there were complaints about incorrect mixes and shoddy packaging, not to mention skimpy, slapdash liner notes. In the case of the Beatles, though, you got four albums per box, each in mono and stereo – that’s about 90 tracks each. Here, you get 66 tracks, but have to change CDs every four songs.

When “Surfin’ Safari” blasted out of transistor radios in 1962, its mixture of Chuck Berry rhythms and doo-wop vocals with more sophisticated, Four Freshman-inspired harmonies was something brand-new. The oldest of the group’s Wilson brothers, bassist Brian, composed catchy hits at a startling pace. Consider: 23 of these songs (counting B-sides, in the days of two-sided hits) reached the charts. That’s almost four hit singles per year – with four, incidentally, also climbing up Billboard‘s Rhythm & Blues chart! (Betcha didn’t know “Surfer Girl” was #18 on R&B.)

With that kind of grind, not to mention writing virtually all of the cuts on this span’s 11 albums, which he also produced, it’s no wonder Brian had a nervous breakdown. Admittedly, there was a lot of filler on the early LPs, but with the more ambitious All Summer Long (1964), Wilson upped the ante, while still having his finger on the pulse of AM radio. (How many two-sided hits match up to “I Get Around”/”Don’t Worry Baby”?) This set ends just prior to Wilson’s masterpiece, 1966’s Pet Sounds.

There’s been much speculation regarding how much L.A.’s “Wrecking Crew” was employed on Beach Boys sessions. Keith Badman’s exhaustive (and recommended) The Beach Boys: The Definitive Diary Of America’s Greatest Band On Stage And In The Studio fills in much (though not all) of those details – including Xeroxes of session logs. It reveals that the early hits, from “Safari” probably through “Fun, Fun, Fun” featured Carl Wilson’s workmanlike Chuck Berry/Dick Dale leads, with studio aces like Glen Campbell, Jerry Cole, and Tommy Tedesco taking over as the music got a bit more complex – and no doubt just for expediency.

Beach Boys newcomers (who would surely balk at the $132.95 list price) should know that the five-disc, 142-track Good Vibrations: Thirty Years Of The Beach Boys includes nearly every song contained here, at a fraction of the cost. And for those who want to hear these songs in the context of the albums they were part of, Capitol’s 1990 series of twofers, featuring great sound and extensive liner notes, is still the best bet.