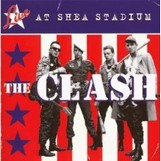 If the Rolling Stones were the “World’s greatest rock and roll band” from 1968 to ’72, then 10 years later, that appellation could safely be conferred on the Clash. In that late ’70s/early ’80s era, no group better defined the spirit, energy and danger of rock music better than this British punk quartet. This live set was recorded in the fall of ’82 on a bill with the the Who and ex-New York Dolls singer David Johanson. Poignantly, the band would break up just a few weeks after the gig, saying they had become as popular as they ever would. And after this show for 50,000 fans, they felt perhaps they had become too famous.

Nonetheless, this album is a high-powered snapshot of the foursome at their commercial peak. Fifteen killer Clash tracks are here, including “Career Opportunities,” “Train in Vain,” “Rock the Casbah,” and their blistering cover the Bobby Fuller Four classic, “I Fought the Law.” Guitarists Joe Strummer and lead man Mick Jones were also captured in excellent form, with Strummer playing his bashed-up black Telecaster (just reissued by Fender), and Jones wailing on a white Les Paul Custom. Twenty-six years later, Live at Shea is a telling look at a band that had once helped invent U.K. punk… but then took it so much further.