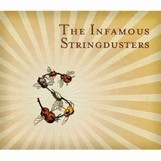 A band’s sophomore release usually has a snappier title than the name of the band. But in some ways this second album is a first album. Guitarist Chris Eldridge left to join the Punch Brothers. Another guitar virtuoso, Andy Falco, now fills his shoes. After two years of touring, the band’s rough edges have been burnished and their sound matured. Instead of a loosely knit high-energy amalgam, The Stringdusters have matured into a finely honed musical juggernaut.

The term “bluegrass” covers a wide swath. On one end are Chris Thile, Bela Fleck, and Darol Anger’s edgy musical explorations. The other extreme is the conservative retro sound of Doyle Lawson and Quicksilver, the Del McCoury Band, and the Open Road Band. The Infamous Stringdusters sit near the midpoint. Their songs feature the kind of rock-solid three-part harmonies championed by Lawson, but their chord progressions occasionally veer into less-traditional territory. Mandolinist Jesse Cobb’s instrumental “Golden Ticket” has the bounce of a Herschel Sizemore tune, but its B part and bridge lean well into the world of acoustic jazz. On bass player Travis Book’s original “You Can’t Handle the Truth,” the band combines smooth vocals with accomplished picking so the barn-burning pace seems leisurely. Just like the Grascals, The Infamous Stringdusters push the envelope far enough to keep things interesting without alienating most traditional bluegrass fans.

Produced by the multi-talented Tim O’Brien, The Infamous Stringdusters sounds polished without being too slick. The performances all have a wonderfully loose quality usually reserved for a great live concert album. After their first album won the International Bluegrass Musician’s Association album of the year, bluegrass fans wondered if the band’s second album could match their first. Wonder no more; it delivers, big-time.