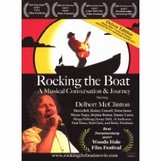 Depicting several of the acts on Delbert McClinton’s Sandy Beaches Cruise from ’06, this film was recognized at a host of film festivals.

Both the conversation and music throughout are thoroughly engaging; McClinton talks about a band-bus break down that forced the band to take a city bus. Al Anderson (former lead guitarist for NRBQ) talks about his first cruise with Delbert and getting stuck in the captain’s quarters during a storm, where he was so sick he couldn’t move. Stephen Bruton talks about playing with Delbert’s band and how one night it paid bar patrons to lift their upright piano onto a high stage. Not wanting to hoist it back down, they left it! These stories, along with interviews with other cruise performers like Jimmy Hall and Marcia Ball, are all fascinating.

The really fun part is the performances on the cruise. As you’d expect, Delbert and his band, with guitarist Rob McNelley, get the lion’s share, especially shining on cuts like “New York City,” “Shakey Ground,” and the incredible “Two More Bottles of Wine.” Rodney Crowell blazes through an incendiary “Dancing Circles Around the Sun,” with blazing lead guitar from Will Kimbrough, and there are sterling turns by Bruton, Tommy Castro, Anderson, Paul Thorn, Ball, and Hall. There’s even a trip to funk heaven with Mingo Fishtrap. Listening to that band rip through “In the Bank” on the deck of the ship, with the sun shining and the water rolling by is about the best promotion they could get.

This Deluxe Edition has bonus cuts that contain some fine work. “Worry Too Much” by Buddy Miller shows why he’s one of the most respected guitarists and writers on the planet. Whitney Johnson is joined by Jimmy Hall on harp for a very fun “Memphis Women and Chicken.” And Bob DiPiero’s lead up to “Mirror, Mirror” is a long but very funny tale involving his former father-in-law, Mel Tillis.

A special treat are archive photos of McClinton shown throughout the disc, often sporting a hippie cowboy look that wouldn’t become popular for several years. All the pictures, the stories, and performances make one thing abundantly clear. McClinton is a survivor, and it’s good to see nice things happening for him at this stage of his career.