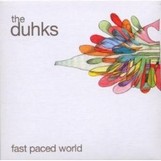 The essence of contemporary “roots” music, The Duhks’ music combines instrumental and vocal textures from folk, blues, country, and soul with the rip-roaring energy of rock and roll.

On their fourth album, the Duhks introduce a new front-woman, Sarah Dugas, to replace original lead singer Jessica Havey, and not surprisingly it results in profound changes. Dugas’ last band, Madrigia, had seven female vocalists and performed material from international cultural traditions. The experience serves her well in the Duhks, where her vocals, as on “Toujour Voulour,” demonstrate her vocal power and delicacy. Sure, she can belt with the best of ’em, but Dugas’ primary strength is her subtlety and ability to deliver a nuanced performance. Tania Elizabeth’s fiddle, Jordan McConnell’s guitar, and Christian Dugs’ percussion have more room to create musical textures. The current roster also has greater range and musical unpredictability. Instead of organic white soul, they focus on Celtic melodies and Middle Eastern polyrhythms.

The Duhks keep a grueling touring schedule, going from Canada to Australia through Europe and across the U.S. during the festival season. In an effort to minimize the negative environmental impact, the band has launched The Duhks Sustainability Project (visit greenduhks.com) and tours using biodiesel in its vehicles, food from local organic farmers, and eco-conscious clothing. I’ve always thought naked was the most ecologically-correct attire, but I digress. At least they’re trying…

Anyway, Fast Paced World serves up a healthy helping of the Duhks’ special sauce. The results are more than ducky.