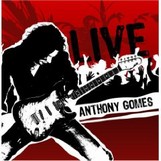 At 38, blues rocker Anthony Gomes makes music like a man in his prime, getting the best from himself while being neither too tired nor jaded to truly enjoy his life’s work. He’s a solid, exciting guitarist whose nakedly visible musical roots form a rock solid foundation. Gomes doesn’t just build upon that foundation, he makes a launching pad of it and boy, does he soar.

Jimmy Page, the under-sung Rory Gallagher and other British bluesman clearly have fingers in. But so do root sources like Muddy Waters, Robert Johnson, of course, (“When The Right Woman does You Wrong”) and even “Ball Of Confusion”-era Temptations in “War On War.” Choice dollops of Stevie Wonder and The Doors enhance “Bluebird” thanks to keyboardist Todd Hamrick, and “Right Woman” owes much to Boz Scaggs’ version of the Fenton Robinson classic “Somebody Loan Me A Dime.” But why give that gift horse the fisheye?

Building on the Experience/Double Trouble model, Hamrick, drummer Denis Palatin – if he isn’t giving you what you want, you’re asking too much – and bassist Biscuit Miller stick to Gomes’ trail like a gang of bloodhounds. Live is so successfully, so delightfully infectious that when Gomes and the new Soul Cowboys burst into a thumping, blistering take on Zeppelin’s “Heartbreaker” out of “Bluebird” it seems the logical, indisputably right thing to do. In some ways, Gomes and band deliver what some of the big cojone, beer-fueled festival acts of the past, from Grand Funk Railroad to Whitesnake (“Falling”) and even (dare it be said aloud?) Wet Willie, promised – mitigated, of course, by actual talent.

In service of this criminally enjoyable set Gomes mainly uses three mid-’60s Stratocasters and late-’90s Teles. A couple of custom Gigliotti guitars augment other well-employed pieces. Such choices testify to his love and mastery of classic tone and feel. If a young Gomes took heat for sneaking into dad’s record collection, it was worth any hidin’ he got for it.