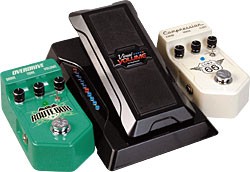 Visual Sound founder and president Bob Weil and chief engineer R.G. Keen have given their flagship combo pedals a face lift and introduced a new line of single pedals. These new V2 series effects are built on heavy duty die-cast aluminum chassis, replacing the steel housings on the old line, their in/out/power jacks are still hand-wired, they get a new switching system, and there’s a new “tone buffer” circuit designed to reduce signal degradation caused by cables and other effects. 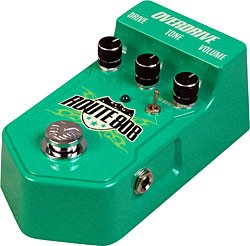 Through a 20-watt EL84 1×12″ combo, the Route 808 produces the anticipated thick, harmonically rich “Tube Screamer” sound with a lot of midrange boost. But unlike the classic Ibanez version, with the Visual Sound the user can activate the pedal’s Bass Boost mini-toggle to regain some of the low-end lacking in the classic pedal. This makes it great for chunky rhythm parts and gives it a fuller overall tone. 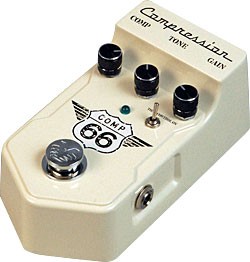 Controls on the Comp 66 include Compression, Tone, and Gain, as well as a mini toggle that disengages the Tone control. The pedal delivers everything from a light “fattening” compression to a heavy, squashed chicken-pickin’ signal. With its Tone control engaged, it can easily compensate for any loss of high- or low-end response. 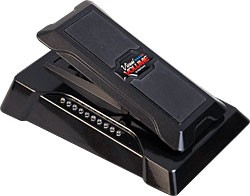 The Visual Volume pedal runs in two stereo modes – passive and active – with internally adjustable independent Gain controls. The passive mode is straightforward; treadled all the way down, the pedal produces no signal, and when treadled up, its 10-LED scale indicator lights progressively as its output signal increases. The active mode works the same, but also engages an adjustable gain boost and the Pure Tone buffer circuit.

The pedal operates with a very smooth taper that’s great for volume swells or quick, accurate volume adjustment. The LED scale indicator is a fantastic aid for consistently producing the same output. Like most wahs, you must remove the bottom of the pedal to get to the battery compartment, and to switch from active to passive. The unit can also be powered by 9-volt DC power.

Visual Sound’s new V2 Series pedals are solid performers, and the Visual Volume is one of the most useful and innovative volume pedals on the market.