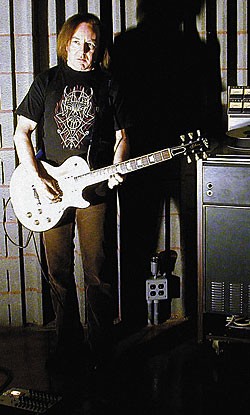 When “Southern rock” became synonymous with jangly power-pop instead of Skynyrd and the Allman Brothers, Mitch Easter was a pivotal figure.

By the time Let’s Active disbanded in 1990, after four albums, Easter was in demand as a producer, engineer, and session player – working with the dB’s, Marshall Crenshaw, Don Dixon, Suzanne Vega, Game Theory, Superchunk, Dinosaur Jr., and the Washington Squares.

He played virtually all instruments on Dynamico (Electric Devil), at his new Fidelitorium recording facility. In addition to deft writing, its 14 originals are vivid reminders that Easter is also one hell of a guitar player.

Outsiders’ assumption is that Winston-Salem must have been very isolated when you and [dB] Chris Stamey had Sneakers, whose ’70s recordings were just reissued as Nonsequitur Of Silence (Collectors’ Choice).
Yeah, the South is the official backwards part of the country and all – but we were basically getting our info from the same TV and print and radio sources as anybody else. Everybody was talking about the Who smashing their guitars on “The Smothers Brothers Show” [in 1967] on the school bus here, too. You could pick up New York and Chicago radio stations on your six-transistor radio at night, but local radio was pretty good when I was growing up. We got the British Invasion stuff and always lots of Memphis Soul, so it was a good mix. This was before “consultants” programmed all radio into today’s horrid blandness! We might’ve been hicks, but we didn’t know it, and, as far as I can tell, our record collections were about like everybody else’s.

Who are your biggest influences?
I’m really terrible at lists of any kind and mainly can just think of people I’ve listened to lately! So, if I’ve been listening to Roxy Music, I will say that Phil Manzanera is simply the best, etc. I sort of had to be affected by the Clapton-Beck-Page thing and the general attitudes of the oddly sniffy local guitar teens in Winston-Salem when I was a kid. These guys really knew their stuff, so it was all about vibrato and getting proper tone through your amp. Fuzzboxes were seen as antiquated and dinky. So I think I still mostly sound like a ’70s player. I had great fun messing around with those “’80s sounds,” but I couldn’t really be much of a purist about that, so even in Let’s Active we started veering away from all that cleanness!

Probably Sam Moss was the single biggest influence on me. I met him when I was 13 or 14, and he could play incredibly well then – he was 15 maybe. This really opened my eyes! Suddenly I didn’t have to worry about the eighth grade so much; this guitar business was way better. After I met Sam, I could put on Axis: Bold As Love and really feel like I’d escaped to a superior alternate universe! I especially like the songwriter guitar players. Somehow their parts transcend just plain riffing, you know? Players like Roy Wood, Todd Rundgren, Jimi Hendrix, Randy California, and [Big Star guitarist] Chris Bell. 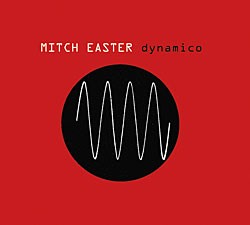 How is Fidelitorium different from the Drive-In?
Drive-In ended in 1994. I’d been in that garage long enough! We moved the equipment to an old house to [produce] the Motocaster record. After four years in the house, I figured it was high time to have a “proper” studio, with correct acoustic design, etc., so the Fidelitorium studio was built in 1998-’99. There aren’t too many places like this left! It’s a fairly big space – more or less the same size as the legendary RCA Studio B, which we figured had to be the right size for a pop music studio. The equipment goes from the 1950s to completely current, because all these eras produced good, useful gear. I think it’s equally ridiculous to be hung up on newness or oldness, so what we have is just what works. We still use a big analog console, and we still use analog tape, in addition to the computers. Everybody knows why the computers are useful, but when we do a tape session, I’m always impressed by how good it sounds. Same with the console. I’ve yet to hear an affordable digital mixing system that doesn’t seem to shrink the sound.

What equipment did you use on Dynamico?
“Break Through” is a ’68 SG Special plugged straight into a 1975 Marshall 100-watt Super Lead with 6550s, and the lead lines are a ’79 Tokai Les Paul Reborn through a Carr Mercury. “I Want a New Scene” is a Rickenbacker 650 with flatwounds through a Sans Amp and a Lexicon 200 reverb set to a weird inverse-room program. “To Be Cool Thing” is the 650 through a ’70s Big Muff and a Leslie speaker. There’s some AC30, and I still use one of those high-power silverface Fender Twins with EV speakers, which I’ve had since Let’s Active. “Ton of Bricks” was done with a ’72 Stratocaster through that amp, and the bass and fuzz bass were, too. I use a ’72 Jazz with flatwounds and a ’66 Precision, through the Twin, an Ampeg B-18, a Kustom 150, or direct.

Other guitars include a Gibson ’57 SJ, a ’60s Hagstrom 12-string, Rickenbacker 365, some crazy psychedelic Höfner with flatwounds, a ’64 Jazzmaster, and a Moderne. Lately, I’m mostly using a 1980 Tokai Reborn Old, which is the best name ever, and a Girl Brand crazy Telecaster-ish thing that sort of defies description and is an excellent instrument.

I’m about to do a bunch of shows this spring and summer, to see what can be done with this new disc. And then I want to make another record as soon as possible. The world isn’t exactly holding its breath for that, but it’s the main thing I ever wanted to do. I keep thinking I might get it right, eventually.


This article originally appeared in VG‘s June 2007 issue. All copyrights are by the author and Vintage Guitar magazine. Unauthorized replication or use is strictly prohibited.
Mitch Easter Band – You/Me