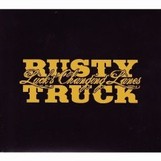 Jakob Dylan, Gillian Welch, Lenny Kravitz, T-Bone Burnett, Willie Nelson, and even Matchbox 20’s Rob Thomas all have a hand in producing, singing, and playing on this expanded edition of Rusty Truck’s debut.

The band is helmed by Mark Seliger, former photographer for Rolling Stone. With that kind of gig it can’t be hard to accumulate favors. Still, getting in the door is one thing, making the party worth joining is another. Seliger, who wrote and sang all the songs on the disc, doesn’t do a bad job of making it so.

Despite being a Texas boy, Seliger’s music is straightforward California country of the lighter late-period Poco type with a little Gram Parsons (“So Long Farewell”) for ballast. One standout is a duet with Nelson titled “1000 Kisses,” with a typical but well-fitted guitar break from Willie. Another is the title song, an especially pretty ballad with Welch. Maybe it was coincidence or maybe he got first pick, but the brightest moments on “Luck’s Changing Lanes” are the cuts produced by Kravitz. Whatever intangibles he brought to the studio were just what Seliger needed to operate at his best. Playing guitar, bass, and various percussion, Lenny makes a strong case for himself as a country player, producer, and the person to whom Rusty Truck should turn for what would likely be an even stronger next effort.


This article originally appeared in VG‘s Nov. ’08 issue. All copyrights are by the author and Vintage Guitar magazine. Unauthorized replication or use is strictly prohibited.