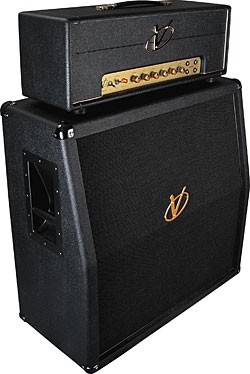 Marshall’s famed 1960s “plexi” and early-’70s 50-/100-watt amps gained notoriety for their fantastic tones. Of course, the downside was that they had to be driven hard to sound their best, which to the player (and anyone else in a mile-wide radius) meant volume – a lot of volume. And that sometimes meant turning speaker cabinets toward walls or employing an impromptu blanket muffler, sacrificing tone for the sake of band harmony and/or the mix. Then there was the consistency factor from one amp to the next, which meant hunting down the best-sounding Marshalls became an expensive game.

In short, when it comes to plexi tone, maybe those weren’t the “good old days.” Perhaps now, in our world of reissues, reproduction, and boutique guitars and amplifiers, guitarists are indeed in the midst of a golden age. If you doubt that’s the case, let us introduce the Voodoo Amplification V-Plex.

Voodoo Amps was founded in 1998 when hardcore tone lover Trace Allen Davis, a professional guitarist and proficient guitar/amp/pedal fixer, began modifying amplifiers. Largely dissatisfied with the offerings of the day, his idea of good tone caught on, and he quickly earned a reputation as a capable, comprehensive amp repair/modification shop.

The V-Plex was “cloned” from an early-1968 Marshall that was serviced by Voodoo and later was purchased by Davis. It was then reverse-engineered, including having its transformers sent to Mercury Magnets for duplication. Upon completion, the V-Plex was A/B tested next to the original. Davis says it sounded identical.

We were offered a listen to the 50-watt V-Plex with Voodoo’s propriety-design 4×12″ slant cabinet. The hand-wired V-Plex is a four-input/two-channel amp with three 12AX7 tubes in the preamp and two EL34s in the power section. It has a single set of controls for Presence, Bass, Middle, Treble, Master and Volume – a layout identical to that of a vintage non-master-volume Marshall. The V-Plex’s Master volume is placed between the phase-inverter tube and the power tubes, which gives the player the ability to dial in plexi-like distortion starting at a very reasonable volume. On/off and standby switches, along with a red indicator, also occupy the front panel.

A look inside reveals flawless workmanship and top-quality components. Davis is, as we said, very much about the look and feel of guitar tone, and the research he put into this head is glaringly obvious. The cabinet uses four Celestion G12M “greenback” speakers, which are seen in amps all over the place. But Voodoo’s cab is a little tricked out; aside from its propritary internal design, it is also capable of operating at either 4 ohms or 16 ohms in mono, as well as 8 ohms in stereo. 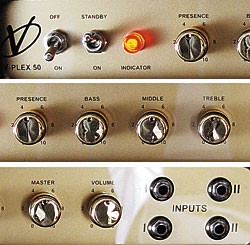 No doubt about it – the V-Plex talks the talk. But to see whether it walked the walk, we recruited a Schecter 006 solidbody with two high-output humbuckers, and a Fender Stratocaster with three Duncan Alnico single-coils. We plugged in the Schecter and started with the V-Plex’s controls set in a familiar plexi manner; Bass at 10, Presence at 4, Mids at 6, Treble at 2, Master between 8 and 9, and Volume pushed to 8.

Flashback
If you’re a fan of the original Marshall JTM 45/50/100 models (if you’re a fan of real rock guitar tones, that’s you!), plugging in the V-Plex could well be the ultimate experience, especially if you’re not hip to coughing up the money to obtain (and hassle to care for) a vintage Marshal. Tone – gain-rich harmonics, with that clear, articulate crunch we’ve come to lust after – spews from the V-Plex by the truckload.

To test the effectiveness of the Master volume circuit, we rolled off the Master and brought the Volume control up a touch, and heard fistfuls of rich gain at reasonable SPLs. Yes, Virginia, you can get great plexi tone at comfortable levels.

The tone knobs reacted almost exactly like those in the original plexi circuit in that they don’t alter the tone much, but produce different textures. Backing off the volume and increasing the Master yielded a cleaner crunch that never surrendered its true character. “Jumping” input channels (a favorite trick of four-input-Marshall owners) substantially fattened the tone.

We next plugged in the Stratocaster. To keep high-end response where we liked it required rolling back the Treble and Presence controls, but the Strat also proffered fat, meaty tone from every pickup and selector-switch position. Crossing channels again, we got more meat right up until we pushed it too hard, when (in true plexi form) the signal compressed beyond the point of being enjoyable.

If you’re after the ultimate vintage plexi tone, your search could very well end right here, as the Voodoo V-Plex delivers definitive plexi tone, and has the ability to play at comfortable levels. Davis and his crew nailed it.

The Collings I-35 LC Vintage