“It’s hot! 77 degrees,” exclaims Charlie Starr from a hotel room in Augusta, Georgia, a few hours before the third date of his band’s latest tour. Even better than winter’s respite is the hint of its wane. “Everybody in our touring party is praising Hallelujah because it’s finally not so cold.”

Along with the change of seasons, Starr and his blood brothers in Blackberry Smoke – Richard Turner (bass, vocals), Brit Turner (drums), Paul Jackson (guitar, vocals), and Brandon Still (keyboards) – have just introduced their ever-expanding fanbase to new music in the form of Find a Light – an album of 13 songs written by Starr with help on a few by sacred-steel guitarist Robert Randolph (profiled in the September ’13 issue of Vintage Guitar), Americana vocalist/multi-instrumentalist Amanda Shires, and fellow guitar zealot/Buckcherry co-founder Keith Nelson (VG, March ’08, May ’13, October ’15), whom Starr has known for 20 years.

The pairings and their resultant tracks combine to help form a tasty musical melange with a wondrous range of feelings and moods. As the clock clicked toward sound check, Starr sat for a bit and dug into the ways good friends and great guitars pushed his latest thoughts and dreams “to tape.”

When Blackberry Smoke records, is everyone together in the studio?
Always. I think most musicians agree that the magic in a band happens when you’re playing together, interacting. We’ve made quite a few records now, and I love the process. Our producer, Brendan O’Brien, is one of the best in the world. He helped by reminding us, “Hey, man, perfection is not where it’s at. Passion is where it’s at.” And if the band gets fast, but it feels great, then screw it. Let it get fast. We’ve learned to avoid whatever might encumber the proceedings.

If you have chemistry, let it flow.
Yeah. There’s a famous quote by Jimmy Page where he said something like “I wanted ‘Stairway to Heaven’ to speed up. And that’s against the musical rules…” And why is that a rule? Who knows?

How long did it take to record?
The basic tracks were done in eight days.

How did you go about choosing instruments, amps, and effects?
Well, I love that process. I always have guitar amp combinations in mind, even sometimes as I’m writing a song. And sometimes the song will come out of an instrument, you know? But I always have that mapped out. It doesn’t always work the way I want, of course. Same with effects; I’ll start pre-production thinking, “Oh, I’m gonna use an Echoplex on this and a Fuzz on this. I’m gonna try a tweed Deluxe miked from 50 feet,” or whatever. There’s beauty in that.
Eddie Van Halen put a post on social media on the 40th anniversary of Van Halen’s first record. It said, “That entire record is my Super Lead plexi head with the Variac turned down to 89 volts, a 4×12 slant cab, and an SM57 on every song in the entire record. Nothing changed.” And for a second or two I thought, “What are we doing here, playing two different guitars on every song?” (laughs) I mean… Wow! But whatever, it’s the love of the chase.

At times, did it occur to you that a certain guitar would work particularly well for a certain song?
Yeah, and a good example is “Flesh and Bone.” The guitar on that is an Echopark ’55 Gold I’ve had for a few years. It’s a single-cut with Gabriel Currie’s version of a Filter’Tron pickup in the bridge. It’s a big, nasty, beefy, wide-open-sounding pickup with a beautiful, broad range of tonality. It’s got the lowest lows and the highest highs and the biggest midrange. I tuned down a whole step from open G to open F, and this monstrous sound came out of that guitar. So I knew what I’d be playing on that song. People have asked, “Hey, what fuzz are you using on that?” And I tell ’em, “Nothing. It’s The ’55 Gold through a ’76 50-watt JMP head and 4×12 cabinet. That’s it.”

I used my ’63 Esquire on almost every other song because it was so right at home for some reason. I’d grab another guitar sometimes but end up thinking, “Nope… Back to the Esquire.” It ruled the day.

Where’d you get that guitar?
In Houston, at Rockin’ Robin, three years ago, maybe.

Do you prefer an Esquire to a Tele if you’re dealing with the old ones?
I kinda do. Much like the Junior/Special thing, there’s no neck pickup. I was talking to [Guns N’ Roses/Dead Daisies guitarist] Richard Fortus about Juniors and Specials, and why it is that Juniors seem to sound better and feel better than Specials. And he brought up the point that the magnetism of a neck pickup robs a little of the tone from strings as they vibrate. I’d never thought about that. People talk about the way the pickups are mounted – whether a dog-ear P-90 will sound better than the soapbar… and that’s debatable, of course. But I started to wonder if you could factor that in with an Esquire, too. That there’s no neck pickup to encumber that beautiful sound.

Do you have any maple-board Esquires?
No. I have a maple-board Tele with a B-bender that we used quite a bit. It’s a newer one, but good. But something about rosewood is just spongier… not as bright, friendlier almost. And the ’63’s got that in spades.

How did Keith Nelson become involved in your songwriting process?
He called one day last year while working in his studio. He asked what I was doing, and I said, “Trying to get geared up to start writing for our next album.” And he told me he had some ideas. It was nothing we’d ever approached together, but his input really kick-started my songwriting and before I knew it, we had six or seven songs I felt were pretty special. I kept four because they felt very much like Blackberry Smoke songs. I think he agreed.

You and Robert Randolph ratchet up the playing a bit on “I’ll Keep Ramblin’,” which is a high-paced blues that takes on a gospel feel midway through. How did that come together?
Robert had recorded an instrumental version of it, but I wrote lyrics for this version; we’d actually performed it on “Skyville Live,” a music show from Nashville, and had such a blast doing it. I thought it just fit so well on the album. So I asked, “Will you come do it with us?”

Did he bring in some of his band?
No, it was just him. The backing vocals are twin sisters from Atlanta who put a beautiful gospel touch on it.

You also teamed with Amanda Shires for “Let Me Down Easy.” How did you connect with her?
For that song, I thought it’d be really cool to have a female harmony vocal for a guy/girl duet – sort of a Gram Parsons/Emmylou Harris kinda thing. I’d been listening to Jason Isbell’s newest record and heard Amanda singing with him. Her voice is great, with a very unique quality. So I figured I’d ask. I’ve known Jason for a while, so I reached out to them and she was kind enough to lend her talent. BBS was on the road when she went in and cut her part, and she did a fantastic job.

She hangs with some heavy-hitter guitar players – Jason, Jerry Douglas, Tommy Emmanuel…
Yes, she does, and she’s a fine fiddle player.

Were there any particularly challenging moments on Find A Light, in terms of writing, composition, or recording?
Not really. In fact, the album was a real treat to make because everyone played so well and it flowed so freely. There were no teeth-gritting moments like when you’re ready to kick an amp over. A song like “I’ve Got This Song” can be tough to record because it’s so understated. You’re looking for vibe with a song like that, so you play as little as possible and leave as much open air as possible. For a rock-and-roll band, that can be kinda tough; it’s like tying your hands behind your back. But there’s the beauty. And I think the older we get, people ask, “How do you think the music has changed or grown?” And that’s one of the elements in which I see growth, musically, is we learn when not to play.

You appreciate letting it breathe.
Yeah, and I love that. Sometimes, silence is golden. Then on the next song, you can dime it again and let it all hang out.

Is there a track or two you find yourself wanting to hear more often?
Well, it’s so new to me right now that I love the it all, ya’ know? Give me a month or two and I’ll find things to nitpick and wish I’d done differently, but that happens with every record. For a good while, I listened over and over to the bookends – “Flesh and Bone” and “Mother Mountain.”

They have completely different feel and attitude – the high-energy opener and nuanced finalé.
Yeah, and it wasn’t hard to decide that “Mother Mountain” would close the album because it’s an uplifting song, lyrically… hopeful. And if you listen to the very end, after the fade you can hear a door open, then rain. It was raining really hard one day while we were working on vocals, and I asked the engineer to capture it. So he stuck a microphone out the door so we could hear that real, live Georgia rain.

You made fantastic use of the harmony-vocal parts.
Yeah, the Wood Brothers, Chris and Oliver, are old friends, and their harmony vocals just stop me in my tracks every time. I wanted them on that song because it’s three-part all the way through. They were kind enough to help.

The song is such a cool mash-up of bluegrass and folk with a bit of Zeppelin III feel thanks to your open-tuned guitar.
Yeah, it’s open E or D… I forget. That has always been influential to me. There are plenty of times when I’d rather listen to Jimmy Page’s acoustic playing than electric because he was so imaginative with tunings. And the cool slant he bought with them. To this day, III is my favorite Zeppelin record because of that.

Different sounds…
Yeah. You can get hurdy gurdy with it (laughs). 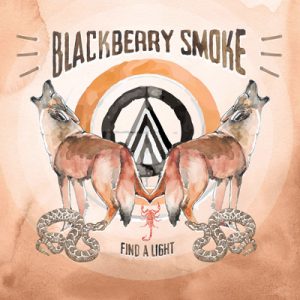 Overall, Find a Light is loaded with feel and energy…
There’s always a give and take when it comes to songs, and I’ve tried to keep that. There’s nothing I hate worse than putting out a record that sounds the same from beginning to end. The only band in the world that can get away with that is AC/DC (laughs). Our favorite albums are always a listening experience – a total album, not just a collection of singles. The Beatles taught us how to do that.

Very true. Speaking of experiences, you’re already back on the road…
Yeah, we’ll go all year. We’ve got a lot of work to do – U.S. dates, then back to Europe. We’re playing the Ramblin’ Man Fair June 30 or July 1 along with Gov’t Mule, The Cult, Mott the Hoople, Steve Earle. It’s a real mixed bag. And there will be full European tour in the fall.