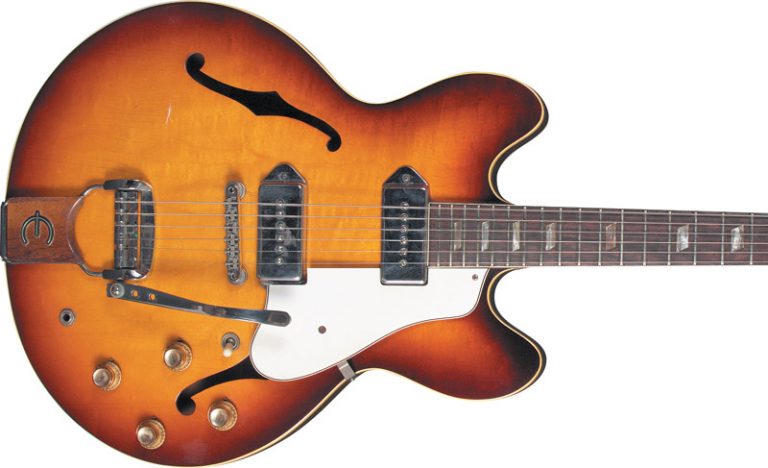 In the Epiphone line of the 1960s, the Casino occupied middle ground. In appearance as well as electronics it ranked well below the semi-hollow Sheraton and Riviera or the solidbody Crestwood Custom. But thanks to the Beatles, it is probably the best-known of all Gibson-made Epi models.

Like most of the Epiphone line of the ’60s, the Casino bore little resemblance to the Epiphones of a decade earlier, much less the ’30s archtops on which the company had built its reputation (be sure to read the feature on the Epi harp guitar in this issue).

With roots in Greece and Turkey, Epiphone was founded as the House of Stathopoulo in the early 1900s. Epaminondas “Epi” Stathopoulo, one of the founder’s three sons, led the company to a prominent position in the tenor-banjo market of the ’20s (an era in which Gibson struggled to develop a competitive banjo model). Epi had the foresight to recognize the rising popularity of the guitar in the late ’20s and, in particular, the role the archtop guitar – an instrument invented by and produced almost exclusively by Gibson – would play in popular music of the coming years.

In 1931, Epiphone attacked Gibson’s dominance with a line of archtops called Masterbilt, playing on the notoriety of Gibson’s L-5 “Master Model.” Gibson responded with more and larger models, and Epi countered with an even larger model. The competition extended to the electric line, where in 1937 Epiphone introduced a pickup with individually adjustable pole pieces, and Gibson followed suit in 1940.

During the production hiatus for World War II, Epi Stathopoulo died of leukemia, and when guitar production resumed after the war, the company struggled. Its six-pushbutton pickup selector system on the three-pickup Emperor was an arguable improvement over the six knobs Gibson used on its three-pickup ES-5, but in most areas of the market, Epiphone lagged behind Gibson. Epi’s brothers were unable to bring the company back to its pre-war prominence, and in ’57 they sold Epiphone to the Chicago Musical Instrument Company, Gibson’s parent.

Ted McCarty, general manager of Gibson, viewed Epiphone as an opportunity for Gibson to expand its dealer network while maintaining territorial exclusivity for existing Gibson dealers. McCarty continued some of Epiphone’s archtop models in the new lineup, and other Epi features, such as multi-ply necks and metal-covered single-coil pickups, also provided continuity between the old Epis and the Gibson Epis. However, most models in the Gibson-made line were completely new.

Gibson had been making thinline electric guitars since 1955 (the Stathopoulos had never introduced a thinline Epiphone), and Gibson introduced the thinline double-cutaway, semi-hollow ES-335 in 1958. Almost concurrently, a similar (and fancier) model appeared in the Epi line – the Sheraton. A year later, Gibson introduced a stepped-down model with the same body shape but with a fully hollow body and single-coil pickups, called the ES-330. In ’61, a model similar to the Gibson ES-330 showed up in the Epiphone line as the Casino.

Structurally, the Casino was the same as the ES-330, with a thinline, double-cutaway hollow body. Functionally, too, it was the same guitar, with one or two “dog-ear” P-90 pickups (with black covers), a Tune-O-Matic bridge, and a trapeze tailpiece. A vibrato was optional. Cosmetically, both models had single-ply binding on the top, back, and fingerboard, pearl dot fingerboard inlays, and an inlaid peghead logo with no other ornamental peghead inlay. The Casino was offered in sunburst or Royal Tan finish while the ES-330 was offered in sunburst or natural.

Gibson designed the Epiphone line to have prices slightly below the equivalent Gibsons, but the only significant difference between the standard Casino and the ES-330 was the brand name. In ’63, Gibson apparently valued the Gibson brand at $15 more than Epiphone. The two-pickup Casino listed that year for $275 and the sunburst ES-330 was $290 (Cherry finish, which had replaced natural, was $305).

Despite the lower prestige of the Epiphone name, the Casino actually topped its Gibson counterpart slightly when it came to the vibrato. The Epiphone vibrato had an anchor bar with a graduated diameter to compensate for the different string diameters. The result was a more consistent pitch change across the strings. Whether the improvement was noticeable to the ears of listeners is arguable, but the Epi-style unit at least had the appearance of an improvement over the simple U-shaped spring design of the Gibson “Maestro” unit, and the Epi unit was not offered on any Gibson model. In fact, the 1963 catalog did not offer any kind of vibrato as an option on the ES-330, while the vibrato-equipped Casino remained a catalog model.

The relative merits of the Casino and the ES-330 – and most other Epis and Gibsons models, for that matter – became irrelevant when Casinos appeared in the hands of the Beatles. Paul McCartney bought a sunburst in 1964, and John Lennon and George Harrison each bought sunbursts in ’65. In ’67, Harrison played his Casino equipped with a Bigsby on a video for “Hello Goodbye,” and Lennon played his on a TV broadcast of “All You Need Is Love.” By September ’68, when the group appeared on the BBC show “Top of the Pops,” Lennon had scraped the finish off his Casino, and Harrison did the same to his shortly thereafter. Lennon played this now-natural Casino on the Beatles’ final appearance together on January 30, 1969, on the rooftop of the Apple building.

If the Beatles had any influence at all on Epiphone sales, it was too little, too late. Through the ’60s, Epiphone sold more than 6,700 Casinos – more than double the sales of any other model – but that was not enough to save it. By the end of ’69, Gibson had scrapped the entire Epiphone line and replaced it with a new line imported from Japan. By the time the Beatles’ rooftop performance was seen by the public in the film documentary Let It Be, it was May 1970, and nothing in the Epiphone line resembled a Casino.