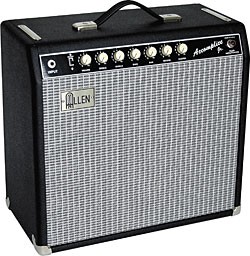 First impressions of Allen Amplification’s new Accomplice Jr. begin to form even before you open the box – it’s so light you might think (as we did), “Did they ship just a head?” But our fears were assuaged when we cracked open the box to reveal a gig-ready 1×12″ combo that weighed in at just 38 pounds.

Like Allen’s larger Accomplice model, the Accomplice Jr. is a hand-made all-tube unit that pumps out 22 watts (with a pair of 6V6 power tubes) or 35 watts (with 6L6s), and also uses four 12AX7 preamp tubes along with a GZ34 rectifier. Like its progenitor, it operates in Class AB push/pull with controls for Volume, Treble, Middle, Bass, Reverb and Master volume. There’s also a Bright switch and a knob labeled “Raw.” Switches for Power and Standby are mounted on the backside of the chassis.

The Accomplice Jr. ships in three familiar configurations; 1×10″ or 1×12″ combo, or as a head. We recently took a swing at a 1×12″ loaded with an Eminence Patriot Red White & Blue speaker.

Similar to its bigger sibling, the visuals of the Accomplice Jr. will appeal to anyone who lusts after a pre-CBS Fender amp, with black tolex, silver-sparkle grillecloth, and vintage cream knobs that combine to say “Leo.” The blackface control panel and logo lettering complete a very Fullerton-esque package.

And as attractive as it is outside, for the tube-amp lover, the inside of the Accomplice Jr. is true nirvana. The chassis, housed in a finger-jointed pine cabinet, is 18-gauge stainless steel with spot-welded corners. The unbelievably tidy point-to-point soldering connects solid-core PVC wiring on a glass epoxy circuitboard with brass eyelets. Switchcraft jacks and Carling switches send electrical signal through carbon-film resistors to Mallory M150 and CDM silver-mica capacitors. The transformers and the choke are made in the U.S.; the proprietary Allen TP25 power transformer features a center-tapped heater winding and internal hum shield, and is made with M-6 lamination steel Allen says helps keep it cool. The TO35MT power transformer features a paper bobbin, also made from M-6. The Reverb is a two-spring, medium-delay Accutronics unit that’s entirely tube-driven. Allen uses TAD 6L6 power tubes because he says they do a better job of staying matched than do other brands.

The circuit is essentially borrowed from a Fender Deluxe Reverb, except it has only one channel and no vibrato. However, the Bright switch more than makes up for the lack of a second channel. There are also controls for Middle tone and Master volume, which make getting your tone at any volume much more accessible than on a Deluxe.

The first tones we heard through the Accomplice Jr. were created by a recent-issue Gibson Les Paul Special with Rio Grande Jazzbar and Bluesbar P-90-style pickups, a TonePros ABR bridge, and aluminum tailpiece. They teamed up to produce a snarl that was just plain < I>malevolent. With the bridge Bluesbar engaged, the EQ knobs set to straight-up 12 o’clock, and the volume at 10 o’clock, our LP Special parlayed a bright-but-smooth tone. Moving the volume up smoothed out the tone and noticeably reduced high-end response. With the volume knob at about 2 o’clock, distortion was full and creamy.

Turning up the Raw knob put a beautiful edge on the Accomplice Jr.’s distorted tones. This is not an understated control that makes you say, “Yeah, I think it did something.” No, sir. While the Volume and Master controls help you dial in the basic level of overdrive, it’s the Raw knob that lets you fine-tune the distortion, making it easy to find the right sound.

Given its power, light weight, high-quality components, construction, and stellar tones, the Accomplice Jr. is a no-brainer recommendation. In a world of amps with similar appointments that start at $2,500, it’s a steal.


Price $1,399 (retail).
Contact Allen Amplification, 1325 Richwood Road, Walton, KY 41094; phone (859) 485-6423; www.allenamps.com.
This article originally appeared in VG‘s May 2007 issue. All copyrights are by the author and Vintage Guitar magazine. Unauthorized replication or use is strictly prohibited.