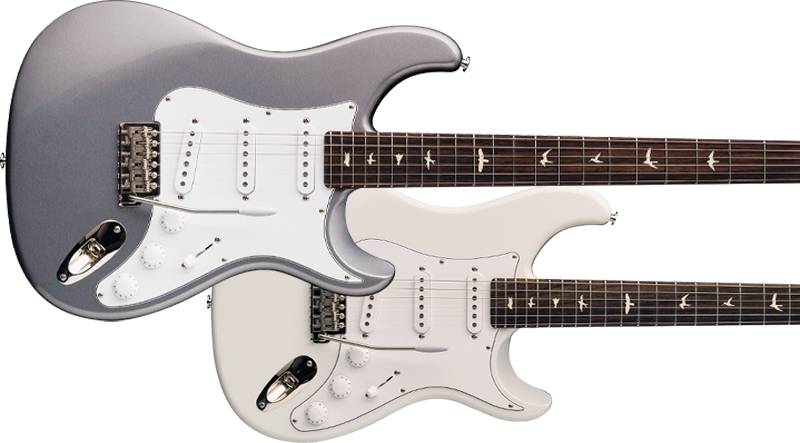 Paul Reed Smith has for years experimented with Leo-inspired concepts, and his newest guitar, conceived in collaboration with rocker John Mayer, lands squarely in that traditional single-coil solidbody arena. But while the Silver Sky may resemble the venerable Fender archetype, it has Smith’s design fingerprints all over it.

Sure, some of its specs are “familiar” – alder body, bolt-on maple neck, 22-fret rosewood fingerboard, 25.5″ scale, and 7.25″ fretboard radius. But beyond those basic elements, it steps away from vintage Fender with its new 635JM pickups, voiced to be clear and chiming without brittle high-end, and a five-way pickup selector that offers noise-free settings in positions 2 and 4.

Controls include a master Volume at the top of the array, a Tone knob for the middle and neck pickups in the center, and a treble roll-off at bottom.

The steel vibrato bridge has three springs in the back and PRS’ Gen III knife-edge screws on the front plate. Interestingly, though, it’s set up as a “dive only” vibrato – a request from Mayer himself, the philosophy being that direct contact between the back of the bridge and the body helps transmit tone and resonance better than a floating vibrato. However, the unit can be converted to float. Also notable is how PRS flipped its trademark headstock to accommodate Mayer’s playing style. An added benefit is the resultant consistency in string lengths behind the nut, which helps the guitar better stay in tune. The locking tuners with silver buttons and a silver truss cover go with the theme, and while some will balk at the three-and-three headstock, it’s purely an aesthetic concern. In terms of functionality, the headstock, pitch, and locking tuners ensure the Silver Sky delivers superior intonation and tuning.

The biggest innovation on the Silver Sky, however, is somewhat unexpected; the heel. Rather than a standard “block,” it has a curved heel under the 17th fret, which allows the player to grab all 22 with shocking ease – it’s more like an SG, Flying V, or PRS Custom 22. One quickly realizes they have far more upper-fret access than with the typical Strat.

The Silver Sky can be had in four colors – Onyx, Frost, Horizon (red), and Tungsten (silver). The lower horn scoop has a fun finish tweak in the form of a slightly different tint than the main body. The fingerboard bears PRS’ iconic bird inlays.

Our tester Silver Sky’s neck was set up with fast, low action and perfectly dressed frets. The carve – based on a pair of Mayer’s favorite Strats from the ’60s – has a full D shape and is very comfortable. The guitar was tested with a combo tube amp and overdrive pedal. Tonally, it’s big, clear, and airy when played clean, and fat and resonant with overdrive kicked on, so it’ll cover everything from Buddy Holly and Hank Marvin to Jeff Beck and Stevie Ray, no problem.

With PRS’ take on a classic solidbody design, Smith and Mayer have added a few tweaks and innovations that will grab the attention of a lot of players. There’s so much to dig with this guitar, but most are sure to keep going back to that neck heel and amazing upper-fret reach, which changes everything.