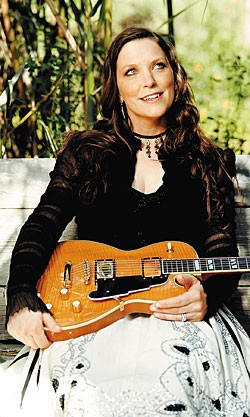 For someone who first came into prominence after being nominated for Best New Artist at the 2000 Grammy awards, Susan Tedeschi has firmly established herself as one of the most electrifying talents to emerge on the blues scene since the heyday of Bonnie Raitt, an artist to whom she has drawn frequent comparisons.

“I’ve always considered that a high compliment,” says the 34-year-old, who has not only had the chance to perform with Raitt, but has also opened for a list of artists that includes Bob Dylan, The Rolling Stones, Buddy Guy, and B.B. King.

Tedeschi manages to not only run a successful musical career, but she balances it all with being a mother of two young children and maintaining a four-year marriage with guitarist Derek Trucks, who leads his own ensemble and performs with the Allman Brothers.

Tedechi has good reason to be pleased with her musical career, and the release of her fourth album, Hope and Desire (Verve Forecast). While previous releases have stressed her admirable guitar and songwriting prowess, the new album places more emphasis on her vocal interpretations of songs by other artists she has long admired. She radiates confidence in putting her own unique take on material written or previously performed by the likes of Ray Charles, Aretha Franklin, Donny Hathaway, as well as Dylan and the Rolling Stones, eschewing the obvious cover songs in the process.

Her diversity can be traced to her father, who in addition to turning her on to artists like Lighnin’ Hopkins, Fred McDowell and Linda Ronstadt, gave his young daughter her first guitar, a 1970 Martin 00-18 that remains her personal favorite. “I still write a lot on it,” says Tedeschi, who, after learning to play moved on to Stratocasters and Gibson hollowbodies before settling on her primary guitar, a ’93 Fender Telecaster she strings with D’Addario .011s and plays through a Fender Super Reverb and a 100-watt Victoria.

While many Caucasian females have taken to the blues, not many have so effortlessly co-opted the idiom’s guitar styles.

“I took on guitar playing because I wanted more respect,” says the Berklee College alumnus. “I wanted people to take me seriously. I didn’t want to be known as just ‘That girl singer.’ Singers know how to sing, and they know it’s a gift. But there’s a specific language of music that only musicians understand. You can’t tell a singer, ‘Okay, let’s go from the 5’. I didn’t want to tell people in my band, ‘Play this like Freddie King would play it.’ You have to first know how to play all different styles of music yourself.”

While Tedeschi has incorporated many styles of music – rock, folk, and R&B – into her work, it’s her love of the blues that has attracted the most attention. But can a young, white, successful woman sing the blues with the same authenticity as, say, Bessie Smith or Billie Holiday, who lived such turbulent lives in a racially segregated society? 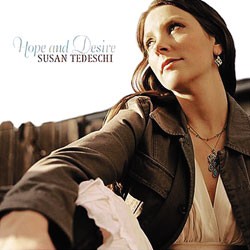 “I honesty don’t think so,” she says laughing. “What I do isn’t authentic, really. Everyone from the original field hollerers to the gospel choirs to Marvin Gaye – they all had this sort of tension. They meant – and believed – what they did. I try to do that. I don’t go out there and just BS.”

As to the inherent differences between blues and gospel, she offers her knowing explanation. “In terms of vocal intensity, they can both be very intense and emotional, but in gospel you’re not just singing as a human being. You want other people to know that you’re singing about God, and you want people to feel good. You’re just trying to tell people that you feel that enlightened feeling.”

However, Tedeschi is aware of the ironic elements shared between the secular and the religious elements of the music. “Just think of someone like Ray Charles,” she says of the late musical icon whose “Tired of My Tears,” she successfully covers on her new album. “He made ‘What’d I Say,’ that was basically taken from a gospel tune, and got a lot of people mad at him, because he was singing about partying, drugs and drinking. That is sacrilege to a religious person.”

Besides interpreting Ray Charles on the new album, she also pays homage to Keith Richards, putting her stamp on “You Got The Silver.” “I love Keith,” she remembers of her 2003 touring experience with him. “And this was such a beautiful song. All of the Stones still love what they do and still have fun. That’s what it’s all about.”

She gratefully acknowledges her debt to all of the veteran artists, besides the Stones, who have been supportive of her. “I’ve been really lucky. I’ve got to tour with B.B. (King) a bunch of times, and he and Willie Nelson are probably two of the sweetest people on the planet. Just down-to-earth, hard-working people who are addicted to music. They treat all of their people so good, and sign autographs for everyone. They’re really humble humans. It makes worthwhile what we do as performers.”

Tedeschi will be taking that philosophy on the road as she gives her fans a chance to experience her latest music first-hand, and witness the musical qualities that have already made her a star of the blues world. However, she takes stardom with the proverbial grain of salt. “I sometimes think ‘What am I doing up here with all these guys?’ Music is still almost a boys club, but if you just go up there and play for the song, you’ll ultimately get respect. One’s job as a musician is to just to play for the song.

“People can tell if you’re a badass,” she adds with a laugh. “By the way you’re playing and the way you make the notes sing.”


This article originally appeared in VG‘s December 2005 issue. All copyrights are by the author and Vintage Guitar magazine. Unauthorized replication or use is strictly prohibited.