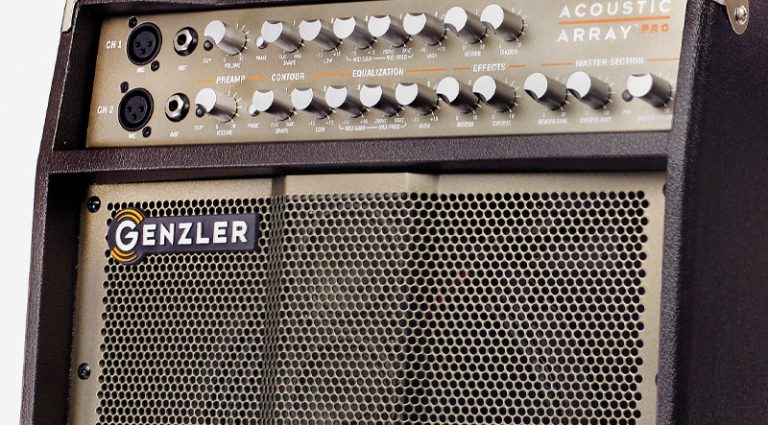 As gigs at coffeehouses, street festivals, and farmers’ markets become more common, a growing legion of performers is being supported by an increasing array of portable acoustic/electric gear. The Acoustic Array Pro from Genzler Amplification recently jumped into the mix.

Assembled in the U.S., the Acoustic Array Pro’s name alone should pique interest; “Array” refers to the amp’s unique speaker setup. While the typical acoustic amp has a woofer and small tweeter/horn, the Genzler has a 10″ woofer in a ported chamber and four 2.5″ drivers mounted in front of the woofer, creating greater dispersal. Shine a flashlight in the grille and you’ll see the speakers mounted in the center bump-out with the woofer behind it. The idea is that this array of speakers produces better clarity, dynamics, and dispersion, as well as a more-natural acoustic/electric tone, since there isn’t a potentially harsh tweeter.

The Acoustic Array Pro offers two channels, each with a 1/4″ input and XLR jack. The inputs on each channel also mix together for simultaneous use, allowing a player to sing and play through the same channel. Each channel has a four-band EQ with Low, High, Mid Gain, and Mid Freq controls, and a Contour knob creates the gentle EQ curve of boosted lows and highs with reduced mids – handy for quick mid-gig tone adjustments. The Contour is also useful for shaping tone – it sounds great for fingerstyle as you turn it up; turn it down for some meaty midrange for acoustic solos. If you sense a feedback howl developing, push the Phase Reverse button to flip the signal and get out of trouble.

Sweeteners include digital reverb and chorus for both channels. You can adjust the reverb tail and chorus rate in the master output section next to the Master Volume. The back has a headphone jack, effects loop, line-level aux input (for keyboard, phone/tablet, or MP3/CD player), and an effects on/off jack.

Other practical features are a slanted cabinet for better projection, especially in small spaces, and a bottom-mounted stand adapter to raise the Acoustic Array Pro off the ground. The amp sports 150 watts of output, though you could add another cabinet and ratchet that up to 300. If you need more output, three XLR outputs facilitate connection to P.A., recording desk, or a power amp. You can even set the outputs for pre- or post-EQ, which can be useful for managing live sound.

Plugged in, the Acoustic Array Pro provides extensive tone-sculpting tools to deal with the ups and downs of amplified acoustic audio. It has a big, airy tone – much larger than you’d expect from a small combo – yet delivers extensive bass frequencies with detailed top and middle control. You might wish for a compressor (as found on some acoustic amps), but it’s unnecessary. With a Yamaha Transacoustic dreadnought, the Genzler provided a big, crystal-clear sound and a well-controlled dynamic range. The reverb was warm and deep, giving the dreadnought lots of personality and impact.

Given all of its features, you might expect the amp to weigh a ton, but it’s a perfectly manageable 27 pounds, to make your load-out easy. Add the middle-range price and attractive looks, and the Genzler Acoustic Array Pro becomes a serious contender for your acoustic-amp buck.