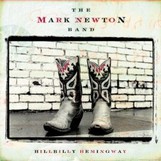 At first listen, you’d call Mark Newton’s music bluegrass, but it’s not just bluegrass. Sure, the affects are slathered on, but the drums give away the game – this is really honkytonk roots rock/pop masquerading as traditional bluegrass. Is that a bad thing? No, but it would be a mistake to assume that Hillbilly Hemingway is merely another Rebel Records bluegrass offering, since it is far more.

Newton’s fifth solo release, and his third with the current band, the album draws material from an array of writers, so it isn’t just one kind of music – there’s country and western (sorry, old joke).

On the album we hear Clay Hess on rhythm and lead guitar, Andy Ball on mandolin, John Wheat on banjo, and Beth Lawrence on bass. Additional musicians include Stuart Duncan on fiddle, Rob Ickes and Randy Kohrs on dobros, and Tony Creasman on percussion and drums. Unlike so many bluegrass albums where the touring band is shoved aside in favor of studio pros, Hillbilly Hemingway has the band handling most solos, and each band member gets to sing lead on at least one song.

Every song has as much finesse and polish as any big-budget Nashville hot-country release. The sound is clear, warm, and very natural, and epitomizes what modern acoustic music can sound like when recorded right.


This article originally appeared in VG‘s Feb ’07 issue. All copyrights are by the author and Vintage Guitar magazine. Unauthorized replication or use is strictly prohibited.

John 5 – The Devil Knows My Name