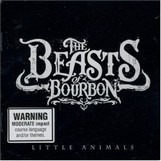 The Beasts of Bourbon have always been a vehicle for vocalist Tex Perkins, but have also been as much a side project as a major recording and touring force. Well-regarded and influential in their home Australia, they have never had much reason to venture forth. But the new work may break them big in spite of themselves; it’s 35 minutes of classic rock that blends familiar riffs, grooves, and feel, overlays hooks and gritty vocals, and gets it done in about three minutes before moving on.

Every song on this disc is so to-the-point you have to ask what decade you’re in. If you melded ’60s AM rock to ’70s FM AOR or mixed the Faces with Ted Nugent and Motorhead (seriously!) you’d get the idea. Two of the strongest cuts have a Stonsey vibe, but are purely original. “I Don’t Care About Nothin’ Anymore” and “I Told You So” are mature rock, alive with vigor, and fresh even if familiar. That could be the Fender and Gibson guitars through Marshall amps relaying that classic sound. But more likely, it’s the creative energy of musicians who understand that the simplest approach can often create the best music.


This article originally appeared in VG‘s Aug. ’07 issue. All copyrights are by the author and Vintage Guitar magazine. Unauthorized replication or use is strictly prohibited.