TOLEDO, OH (JULY 18, 2019) – Reverend Guitars and Reeves Gabrels have had a happy collaboration for
the last ten years. To celebrate, Reverend is releasing the Reverend Reeves Gabrels Signature RGX. The
anniversary guitar comes in transparent black flame maple with “RGX” engraved on the fretboard. Like
the standard version of the Reeves Gabrels Signature, the guitar is loaded with Reeves’ signature
Railhammer pickups in brushed nickel, has a pau ferro fretboard, a bound tilt-back headstock, a
Wilkinson trem routed underneath for extra travel, and a push-pull phase switch in the tone control
knob.
Reeves Gabrels is the guitarist for The Cure since 2012. He was previously best known as a founding
member of Tin Machine and David Bowie collaborator from 1988 to 2000. He’s toured and/or recorded
with many people, including Paul Rodgers, Public Enemy, The Rolling Stones, Ozzy Osborne, NIN, and
many others.
Like all Reverend Guitars, this guitar has a Korina body. A Boneite nut and locking tuners, Reverend’s
Bass Contour Control, and a dual-action truss rod are all for maximum performance. You can’t be
different if you’re playing what everyone else is. Visit www.reverendguitars.com 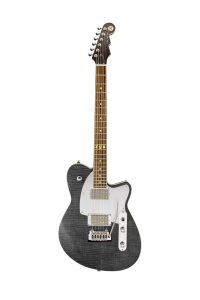 to start your journey
towards being an individual.