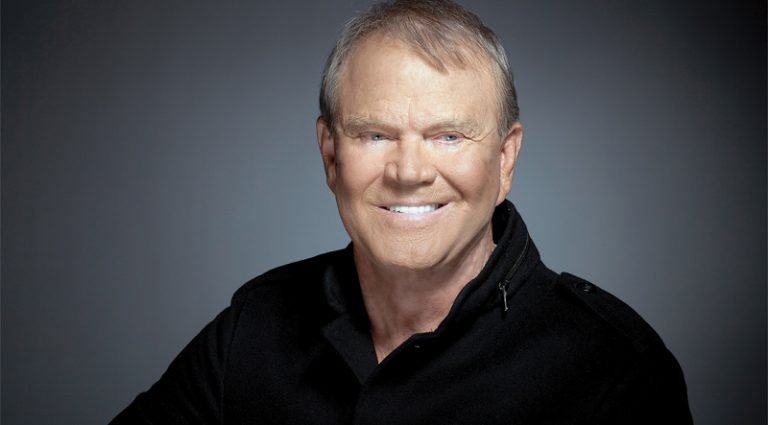 The end of Glen Campbell’s journey was a matter of time once he and his family announced his Alzheimer’s diagnosis in 2011. With the media watching, his career ended with a farewell tour backed by a band that included several of his children. He was 81 when he died at a care facility in Nashville on August 9.

Glen Travis Campbell was the seventh of sharecropper Wes and Carrie Campbell’s 12 children, born in 1936 in tiny Billstown, Arkansas. He eventually acquired a $5 Sears guitar; an uncle taught him the basics. When the family moved to Houston in 1950, Glen left school to play music, absorbing the country greats along with Django Reinhardt. At 17, he moved to Albuquerque to join uncle Dick Bills and his Western-swing band, the Sandia Mountain Boys, playing dance halls, radio, and TV. He made his first records there in 1958 – two rock singles and several country-jazz tunes recorded in Dallas with pianist Stan Capps.

In 1960, he made a well-timed move to Hollywood and played sessions as L.A.’s studio scene was shifting from ’50s adult pop to rock. Campbell’s skills put him among an elite aggregation of younger players informally dubbed “The Wrecking Crew.” He worked alongside a group whose key members were Carol Kaye, Ray Pohlman, Tommy Tedesco, Bill Pitman, Leon Russell, Barney Kessel, and Hal Blaine.

It didn’t matter that he didn’t read music. He played on many classics of that era, from Jan & Dean’s “Surf City” and “Out of Limits” by The Marketts to Wayne Newton’s “Danke Schoen,” “You’ve Lost That Loving Feeling” by the Righteous Brothers, “Strangers in the Night” and “That’s Life” by Frank Sinatra. Elvis Presley’s “What’d I Say” from Viva Las Vegas, Nancy Sinatra’s “Sugar Town,” The Monkees’ “Valleri” and early Merle Haggard hits like “Branded Man” also featured his work. For several months in 1964-’65, he replaced Brian Wilson on bass with The Beach Boys and later played on five tracks for Pet Sounds. From ’64 on, he occasionally performed on ABC TV’s rock showcase “Shindig!”

When Capitol Records signed him in ’62, he recorded bluegrass and instrumental LPs. When they offered him greater creative freedom, he embraced glossy country-pop (backed by Wrecking Crew players) resulting in his Grammy-winning 1967 rendition of John Hartford’s “Gentle On My Mind” and Jimmy Webb’s “By The Time I Get To Phoenix.” In ’68, “I Wanna Live” became his first #1 single, followed by “Dreams of the Everyday Housewife.” Jimmy Webb’s “Wichita Lineman,” his second #1, also earned his second Grammy.

Campbell used many guitars in the studio and became one of the earliest stars to embrace Ovation instruments. In a 1995 interview he said, “They just started the company when I started my TV show. I love ’em… They last. I can leave my 12-string tuned in the case and the neck don’t warp, it don’t come up and don’t do nothin’ – just fabulous.”

He later added G&L and Hamer models, and had long owned an Epiphone Zephyr Regent.

Campbell’s pivotal role in helping establish country music on network TV began when “The Glen Campbell Goodtime Hour” premiered in ’69, joined that year by Johnny Cash’s ABC variety show. Both found success presenting established showbiz favorites and country stars to mainstream viewers, and his versatility with the Wrecking Crew translated well to TV; he could work with a variety of acts, guitar dazzling whether he played solo or jammed with Jerry Reed or Roy Clark. “The Goodtime Hour” even presented Cream performing “Sunshine Of Your Love” before their breakup. When the show ended in ’72, Campbell’s greatest recorded successes were yet to come with his ’75 signature song “Rhinestone Cowboy” and, two years later, “Southern Nights.”

Still active in the ’80s and ’90s, his achievements came into greater focus with his 2005 Country Music Hall of Fame induction and 2008 album Meet Glen Campbell, which reintroduced him, singing songs by U2, Tom Petty, Paul Westerberg, Lou Reed, and John Lennon in his usual country pop style.

With considerable help, Campbell recorded two final albums – Ghost On The Canvas in 2011 and Adios, released this summer. A Lifetime Achievement Award from the Grammy organization came in 2012, but his communication abilities were fading by the time he entered a care facility in ’14. When wife Kim announced this past spring that he could no longer play guitar, it seemed fitting that Campbell’s greatest talent was the last to go.