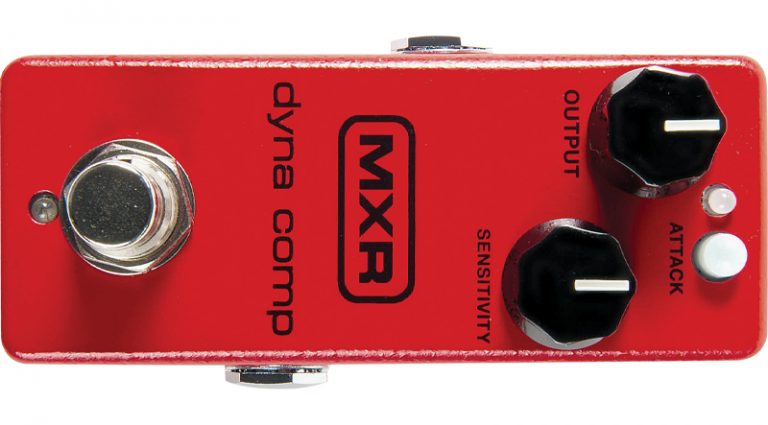 In the ’70s, the original MXR Dyna Comp found its way onto a plethora of now-classic vinyl sides and was a key ingredient to the soundtrack of a generation. With an eye toward the latest trend in miniaturized effects pedals with full-sized sounds, MXR’s Dyna Comp Mini Compressor retains the same rich analog sounds of the original while serving up even more features in a much smaller package.

The setup is simple. Two knobs let the player control Output and Sensitivity (i.e., the amount of compression), while a white push-button labeled “Attack” switches the box between slow and fast attack times. (In the Fast Attack position a small red light switches on; in slow Slow Attack the light turns off.) These controls allow adjusting the amount of squish for subtle R&B double-stops or the punchiest chicken pickin’ lines. Using the Sensitivity knob in concert with the Attack button yields a wide range of sounds, ultimately letting the player sculpt and fine-tune their amp’s personality.

With a Fender Deluxe Reverb and an old Strat, the Dyna Comp Mini revealed all manner of squish and spank. In the Slow Attack position the sounds were warm, subtle, and musical, while in Fast the volume was slightly boosted and accompanied by a tougher, edgier sound. The Dyna Comp Mini also worked great for pushing clean single-note funk lines higher in the mix, and in Fast Attack mode it gave chords a more brittle and chunkier quality.

To top it off, the pedal also added sustain to overdrive pedals without changing their tone. Notes sing with more volume and conviction, leaving the personality of the tonal recipe intact. Those looking for compression with musicality, all in a travel-friendly package, have come to the right place.