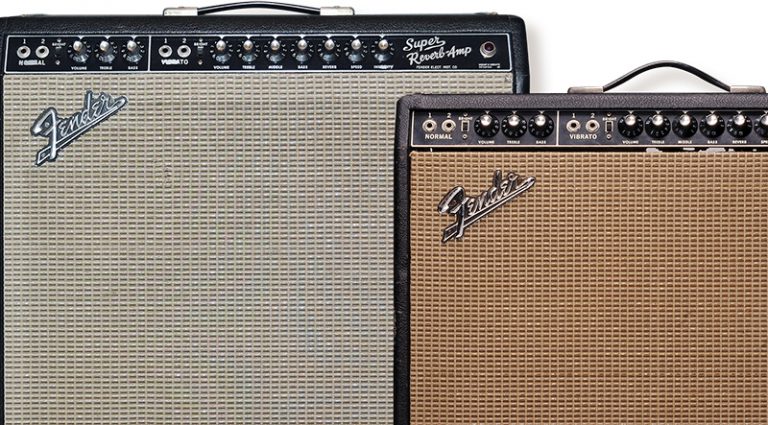 Among the many distinct eras of vintage-amp production, Fender’s so-called “blackface” models are legendary. Made from late 1963 until ’67, they’re loved for the elegant black control panel and their toothsome, versatile tone.

Any blackface Fender in good original condition is a thing of beauty, but it’s even more fun to examine one of the first and what might be the last example of one of the most storied models – the Super Reverb. We’re taking liberties calling these “first and last” as there could be a few that pre- and post-date them, but you’re unlikely to see two such early and late examples of a major blackface model featured together, so please allow a little poetic license!

While an extremely early example of any hallowed vintage amp generally gets collectors’ blood pumping, let’s first take a look at our supposed “last blackface,” since it’s extremely unusual. Those who have already noted the 1968 date of this amp juxtaposed against the “late 1963 until ’67” in the intro might think we misstated something, but what we have here does indeed seem to be a genuine stock blackface Fender completed in late ’68 – nearly a year into the rein of the silverface models.

The amp is owned by blues guitarist Paul Gabriel, who has recorded with Duke Robillard, Harry Chapin, and Rory Block, and was himself featured in the December ’13 issue of VG. By his own estimation, Gabriel has owned 20 to 25 Super Reverbs, and declares this one of his favorites. Though you might expect a thorough probe to reveal at least a little smudging of features, its serial number and component and chassis date codes point to final assembly in the 48th week of 1968. The front and back control plates have been inspected by several parties and deemed genuine, while the cab itself corresponds to blackface dimensions.

“When I first picked it up, I thought it was a typical ’67 Super Reverb,” Gabriel said. “But, my tech confirmed the AB763 circuitry (Ed. Note: second iteration of the blackface spec), and said it was the latest blackface amp he had ever seen. The one thing that is undeniable is it’s a great amplifier, probably constructed from parts leftover at the factory, maybe to just get rid of them.”

“Being from a beach community, in 1963 I started a ‘surf music’ garage band playing a Kay guitar through a Fender Princeton,” he said. “The older kids who played at the high school rec center were using the latest Fenders, and the coolest setup was a sunburst Strat through a Super Reverb. You never quite forget your first encounter with that big four-speaker thump and that super-wet reverb.”

When the chance arose years later to acquire a Super Reverb from his heyday, Hosa thought he was purchasing a ’64, as that’s when the original owner had bought it. “But, the tube chart indicated ‘MK’ for November 1963 and ‘Production 1.’ Another giveaway was that its faceplate was missing the outline around the bright switches – a detail absent from the introduction of the models in late ’63. During this period, the faceplate had only a black silk-screen applied over the bare aluminum, which reads as black with silver lettering and perimeter outlines.”

Among its other quirks is a power transformer with a 1961 date code, but which appears to be factory stock.

From a distance, the two look similar. If anything, the ’68 might look a little older due to its more-yellowed grillecloth. Get closer, however, and details like the early control plate quickly differentiate them, as does a swing ’round back, where you’ll find four Jensen C10R speakers in the ’63 compared with four Oxford 10L6-1 drivers in the ’68. The chassis add further separation, most notably the blue Mallory “molded” signal capacitors in all but one circuit position in the ’63, whereas the ’68 has a greater number of later brown “chocolate drop” caps, along with a few blue Mallories. Though the silverface-era (brown) coupling caps are sometimes disparaged, the preponderance of chocolate does not seem to harm the tone of Gabriel’s amp.

“It’s clean, bright, fat, and warm, with an unmistakable midrange that any guitar seems to love,” he reports.

Hosa is similarly over the moon for his ’63.

“As a player, collector, and amp tech for more than 25 years, I’ve owned mostly Fender amps, and several from each period – tweed, brownface, blond, blackface, silverface. This Super Reverb is a little mellower and sweeter-sounding than my ’65 Pro Reverb, and has a bit more midrange presence and less top-end than most later blackface reverb amps I’ve played. It has a warm airiness while still being touch-sensitive on attack to produce that memorable Fender thump on the bass notes.”

Ultimately, few blackface fans or tonehounds would turn up their noses at either of these beauties individually. Side-by-side, though, they’re simply spectacular.