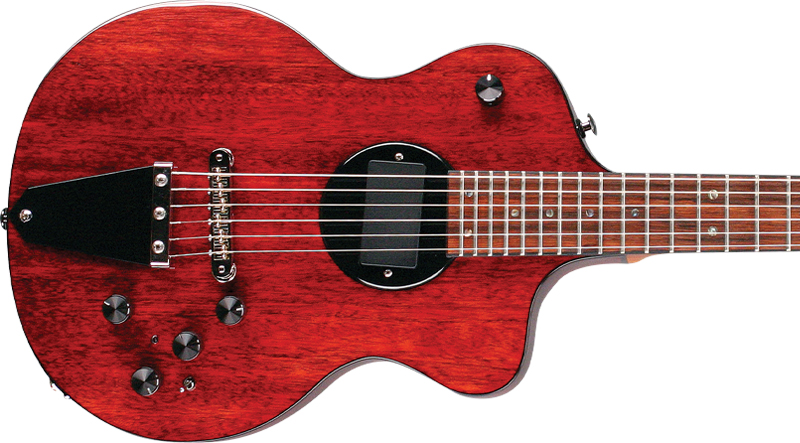 Ever wonder about that strange-looking guitar Lindsey Buckingham of Fleetwood Mac has been playing all these years? The same one John Mayer has occasionally been spotted with as well? It’s the Rick Turner Model 1, and if you want the straight dope on this unique instrument, you’ve come to the right place.

Rick Turner, co-founder of the Alembic Company, met Lindsey Buckingham during the recording of Fleetwood Mac’s Rumors album. As a fingerstylist, Buckingham needed an electric guitar that offered the feel of an acoustic guitar, the warmth and sustain of a Les Paul, and the clarity of a Stratocaster.

During rehearsals for the Tusk tour, Turner brought Buckingham the third Model 1. Buckingham played it for three hours and afterward, according to legend, shouted to his guitar tech, “This is all I need. Leave the Les Paul, the Strat, and the Ovation at home!” The Model 1 allowed Buckingham to switch effortlessly between acoustic textures and electric sounds in a heartbeat. Thanks to improved technologies, today’s Model 1 Deluxe LB has evolved from the guitar originally given to Buckingham, but it still retains the original’s unique personality.

Weighing in at eight pounds, the Model 1 is no toy. Its solid mahogany construction features a maple set-neck with a multilaminate design. A scale length of 24.75″, a 12″ fingerboard radius, and a nut width of 111/16″, yield a beefy full C-shaped neck. The Model 1 comes with Gotoh tuners and bridge paired with Turner’s own tailpiece and hot-wound hum-canceling pickups.

Ergonomic despite its heft, and aesthetically pleasing, the Model 1’s most eye-catching feature is, of course, the rotating pickup that allows the player to emphasize the lows on the bass strings or the highs on the treble strings. There is also a Magnetic/Piezo Blender control that pans between the piezo and the magnetic pickups. Other controls include Master Volume, Sweep for quasi-parametric EQ, Boost Cut, and a toggle that activates the quasi-parametric circuit. There’s also a Tone control and push/pull coil tap for single-coil sounds. The compartment for the two block batteries that power the active electronics is located under the tailpiece.

Plugged into blackface combos and high-gain heads, this is no beater for neighborhood blues jams. The Model 1 is a high-end piece of art for the fastidious artist who requires complex sounds on the fly. With the piezo/magnetic blend turned clockwise, the tone is ultraclean yet strong, yielding smooth but muscular jazz lines with effortless feel. The control knobs mold the sound to the rig, while the toggle enables more bite. Warmer lows or edgy top-end is at the fingertips.

Blend the piezo with the magnetic pickup for a combination of acoustic and electric sounds or either one. The acoustic sounds are fabulous and will flatter fingerstyle playing with evenness and punch. Pull up the coil tap for sparkling Stratocaster land. Using distortion along with the toggle gives a little noise, but it can be dialed back using the Sweep control to voice the crunch to taste. The Model 1 can scream or purr.

The Rick Turner Model 1 Deluxe LB is a truly amazing musical instrument and a beautiful work of art. It has an innate rootsy flavor that can traverse acoustic, clean electric, and distorted terrains in a pinch. While the controls take some time to suss, the learning curve is easily overcome to create some of most beautiful guitar tones you’ll ever hear through an amplifier.