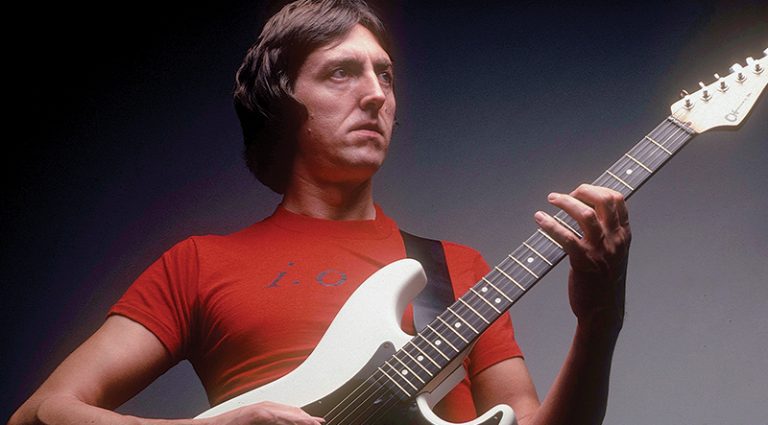 Music fans were relaxing on Easter Sunday when word of Allan Holdsworth’s death began filtering about, bringing shock to the guitar community. For 45 years, Holdsworth had been one of the greatest improvisers in jazz-rock and the personification of the word “innovator.” In fact, earlier in the month his label released a 12-CD retrospective, aptly titled The Man Who Changed Guitar Forever.

After arriving on the ’70s fusion scene in the group Tempest, Holdsworth dazzled fans through fast legato lines in various lineups of Soft Machine, Gong, the New Tony Williams’ Lifetime, Jean-Luc Ponty, and his 1976 solo album, Velvet Darkness, displaying his rarely-heard acoustic chops. Between 1977 and ’79, he broke to a wider audience with the fusion quartet Bruford and prog-rockers UK, the latter featuring bassist John Wetton, who died in January. Holdsworth’s liquid hammer-on phrasing and delicate vibrato-bar chops on UK’s “In the Dead of Night” remains his most famous solo, and had a seismic impact on players from Eddie Van Halen to Alex Lifeson and beyond. For incontrovertible proof, listen to Van Halen’s “And the Cradle Will Rock” or Rush’s “Limelight.”

Notoriously particular about his music, Holdsworth escaped the sideman role in launching a solo career while showing off wild post-bop leads and gossamer chord arpeggios on 1982’s I.O.U., featuring longtime collaborator, keyboardist and drummer Gary Husband. A year later, he was back with Road Games, reuniting with virtuoso bassist Jeff Berlin and sporting Cream’s Jack Bruce on vocals, while 1985’s brilliant Metal Fatigue all but cemented Holdsworth’s place at the forefront of jazz-rock. At the time, Holdsworth’s chordal work on “Tokyo Dream” and “Devil Take the Hindmost” was almost wholly unprecedented – he was playing soft-but-complex clusters like a keyboardist, but on a standard six-string guitar.

For gear, Allan used a white Gibson SG early on, but later deployed a Fender Stratocaster with two DiMarzio PAF humbuckers. After exploring Charvel, Ibanez, Steinberger, and Bill DeLap guitars (as well as amps made by Hartley Thompson, Sundown, Yamaha, and Mesa/Boogie), Holdsworth began a long association with Carvin and Keisel guitars, Hughes & Kettner amps, LaBella strings, and Dunlop picks. By the ’90s, he’d created an ethereal, chorus-like clean tone by layering eight delay units from different manufacturers. In a 1994 interview, Holdsworth told me, “I feed my amp’s output into little load boxes and then to a power amp and speakers. That way, I can play really soft and still get a sound I like. I don’t want to have to play loud to get a good tone. Actually, at the volume I use, I could easily play electric guitar with an acoustic band.”

Albums like Atavachron (1986) and Sand (1987), however, raised eyebrows as he began exploring guitar synthesis via the Synthaxe, a radical MIDI-controller instrument. Despite the obvious beauty of “Distance vs. Desire,” some fans rejected his keyboard-like tones.

Music journalist Tom Mulhern was one of Holdsworth’s earliest supporters in the U.S. press.

“You can’t distill Allan Holdsworth into a simple sentence – he was his own branch of the musical tree, almost a new species of guitar,” he said. “In the 1980s, Allan not only got into guitar synthesis; he pioneered the SynthAxe. It produced no sound of its own, but provided the player with tools that no guitar could offer, including breath control for expression, keys for holding notes, and a reassignable electronic whammy bar that could be used for far more than bending notes. Allan utilized every aspect of the SynthAxe with the expertise of a skilled surgeon.”

On the day of his death, a family friend created a GoFundMe page, noting the 70-year-old’s financial difficulties. Within 24 hours, fans had more than paid for his funeral, indicative of the level of reverence they held for the man.

Thoughts of many notable players began circulating via social media. “Rest In Peace to a giant of Electric Guitar. Hero to generations,” said Vernon Reid, of Living Colour, while Joe Satriani tweeted, “Allan, you remain an enormous inspiration to me. Your beautiful music will live on forever.”

Bill Bruford played with Holdsworth at his creative peak, and offered his own perspective.

“Through my own band and U.K., I listened to Allan nightly, launching sheets of sound on an unsuspecting audience, changing perceptions about what guitars and guitarists should, or could, be doing,” he said. “I would have paid to be at my own gig. Allan wasn’t easy, but if it was easy, it wouldn’t have been Allan. Like all creative musicians, he was restless and relentless in pursuit of ‘the perfect sound,’ the one that he couldn’t get out of his head, the one that would never leave him alone. Now, he will be at peace. Still, my guitar gently weeps.”