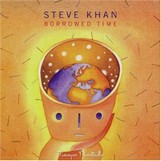 Steve Khan once again proves he’s among the top guitarists of his generation. Khan has always been a fine composer and writer, but here he penned just two cuts – the other seven are by the likes of McCoy Tyner, Thelonius Monk, and Ornette Coleman, as well as a couple of standards, one written by his father, Sammy Cahn. One of the most interesting cuts is near-14-minute original called “El Faquir,” which has a decidedly Eastern flavor, with tabla and tamboura joining traditional instruments. The intro, where Khan mixes bubbling, jazzy guitar blurbs with the Indian instruments gives way to a churning bop feel. The solos by Khan and Bob Mintzer (bass clarinet) are inspiring, and the rhythm section cooks. That rhythm section, by the way, is anchored by the legendary Jack DeJohnette on drums and John Patitucci on bass. Evidence of Khan’s brilliance as a soloist is on display on literally every cut. His mix of solo lines and chordal work is really a trademark and is showcased on cuts like “I Mean You,” “Blues for Ball,” and “You’re My Girl.” His ballad work shines on the mysterious “Face Value,” where his acoustic solo, and Randy Brecker’s melodic flugelhorn, are sheer delights.

The record wraps up with two pieces that have a Latin feel. “Luna Y Arena” features a lovely vocal from Gabriela Anders and an incredibly musical solo from Steve, while McCoy Tyner’s “Hymn Song” is a showcase for percussion that morphs into a Latin sound with more stunning fretwork.


This article originally appeared in VG’s Sept. ’07 issue. All copyrights are by the author and Vintage Guitar magazine. Unauthorized replication or use is strictly prohibited.