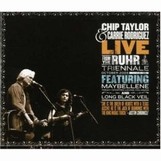 This live set features an especially outstanding back-up band. Festival curator and virtuoso jazz guitarist Bill Frisell joins Greg Leisz on steel guitar and mandolin, David Piltch on bass, and Kenny Wollesen on drums to form the core band. Cameo appearances by Katie Jackson and Denise Brown on background vocals and Buddy Miller on electric guitar happen on the set finale. Besides performing some of their previously recorded duo material such as “Let’s Leave This Town,” “Loredo,” and Red Dog Tracks,” Taylor and Rodriguez added a number of country standards including Lefty Frizell’s “Long Black Veil,” Johnny Cash’s “Big River,” and Chuck Berry’s “Maybellene.” The set wraps up with the Taylor classics “Angel of the Morning” and “Wild Thing.”

Bill Frisell brings a unique musical aesthetic to any project, and this is no exception. His spare, resonant guitar lines contribute amazing depth and air to the arrangements. His simple, tasteful solos are slow and minimalist, yet musically correct. And Greg Leisz’s floating steel guitar lines add to the airy, otherworldly quality of the music. When you combine Frisells’ and Leisz’s floating musical lines with Taylor and Rodriguez’s rustic delivery, you have a combination that captures the earth below and heavens above of American roots music.


This article originally appeared in VG‘s Jan. ’08 issue. All copyrights are by the author and Vintage Guitar magazine. Unauthorized replication or use is strictly prohibited.
Current Issue